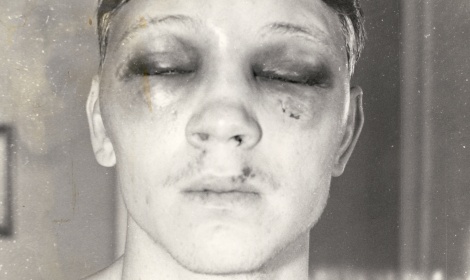 “Hey! All the padding is out of the damn gloves…It’s all out…Commissioner…Commissioner! No padding! There’s no damn padding!”—Billy Collins Sr.

Like a lot of tragic stories, this one ended pretty near where it had all begun. The 1972 Cutlass hit a concrete abutment at high speed on March 7, 1984 and ended up in a dried up creek. It happened not far from the home of his parents. This was the rural South where Billy Ray Collins Jr. grew up.

Billy was born in Antioch, Tennessee, a small town located just south of Nashville. The story goes that his house had plastic coverings for storm windows, but his family was proud, hard-working, and Southern, with documented bloodlines in boxing and strong values. The kid’s father, Billy Collins, Sr., had been a solid professional fighter who took great pride when his son took up the sport and became a skilled amateur, showing thoroughbred instincts that could only be traced to his roots. The senior Collins retired with a record of 38-17-1 (25 KOs). He had gone up against such formidable opposition as Curtis Cokes, Jorge Jose Fernandez, “Irish” Bobby Cassidy, Battling Torres, and Duilio Loi.

Trained by his father, the younger Collins ran off 14 straight pro wins, including 11 KOs. When he became one of the first ESPN boxing champions, his momentum began to take on the aura of a “rags to riches” story. This kid had something special and perhaps was on the verge of being world ranked, maybe even getting in position for a shot at the brass ring. He was a great fan favorite in Atlantic City. He reminded some of a young Sean O’Grady and one could visualize Billy picking up the mantle from Sean and running with it. Interestingly, in 1982, he beat a young Harold Brazier, 5-1 at the time. Brazier would go on to finish with a career mark of 105-18-1and several of his victories were for secondary titles, thus reflecting the kind of promise Billy possessed.

Then in June 1983 and coming off a solid KO win over tough Frankie Fernandez, Billy was booked to fight a Bronx resident by the name of Luis Resto at Madison Square Garden.

As an amateur, Resto had considerable natural boxing talent and won two prestigious New York Golden Gloves titles. He also competed in the 1976 U.S. Olympic trials. When he turned pro in 1977 at the age of 22, Louis had proven that he was a tough and able fighter with a potentially big professional future. However he was poorly managed and poorly matched. In 1978, with only seven pro fights under his belt, Resto fought world rated contender Bruce Curry and was halted in two rounds.

Over the next several years, Resto, a fan-friendly type, continued to fight difficult opponents, and sometimes he won. On his resume were guys like Curry, Mario Omar Guillotti (53-8-5 coming in), Adolfo Viruet, and Nino Gonzalez. Resto was coming off a win over tough “Slammin’” Sammy Horne in April 1983. His 1979 classic win against Pat Hallacy was 10 rounds of pure mayhem and is still discussed among aficionados. He also was trained by the knowledgeable Panama Lewis.

At his peak, Resto was briefly ranked just inside the worldwide top 10. By the time he met Collins, Resto was 20-8-1 and was unranked. However, he was still regarded as a live opponent for almost any welterweight and junior welterweight in the world. The thing was, however, Luis only had eight KOs in his career and was generally considered a light puncher.

It was on the undercard of the Duran-Moore fight in Madison Square Garden (another savage affair in which Duran beat Moore into a bloody pulp and in which the referee seemed to suffer from decision paralysis). It would be a big break for Collins insofar as exposure was concerned, but it would be a difficult test. Resto was somewhat of a slickster/journeyman; moreover, he had a strong following in New York City and had gone up against much better competition.

When the bell rang, the kid, a favorite, started fast but then found himself being surprisingly battered by his supposedly light-hitting opponent. All of a sudden, he was in a fight for his life. He soon complained to his corner that the other guy was hitting him with what felt like “bricks.” Though he managed to stay upright and trade punch for punch for over 10 brutal rounds, he took a terrible beating, resulting in severe facial injuries and horrifically swollen eyes. His misshapen face looked like it had gone through a meat grinder. Billy Sr. asked him if they should stop the fight. “No,” said Junior, and the fight went the entire distance. The courage, strength and sheer determination Billy demonstrated will never be forgotten by those who witnessed it.

When the final bell rang, the local club fighter, Luis Resto, had “beaten” the undefeated welterweight sensation. That he won was not so much a surprise as was the brutally dominant way in which he had done it. Resto had battered Collins’s face into a grotesque mass of purple and swollen bruises eventually resulting in half-blindness due to a torn iris that, as it would turn out, could never be repaired. If Davey Moore’s face would later be turned into a bloody mess, Billy’s was turned into gory purplish pulp.

After the final bell, Billy Collins Sr., who worked his son’s corner, went over to shake Resto’s right glove, saying: “Good fight.” Grabbing the glove, he was shocked to find that the padding had been removed from Resto’s gloves. He immediately alerted the official. “Hey! All the padding is out of the damn glove…It’s all out…Commissioner…Commissioner! No padding! There’s no damn padding!” This can be seen in the following: https://www.youtube.com/watch?v=kEVdywAtk50

The fight was later ruled a no contest when it was discovered that Resto’s gloves had been tampered with. The gloves were impounded and were found to be lacking 60 percent of the horsehair padding usually found in gloves, which, in effect, made them have the virtual impact of bare knuckles or lethal weapons.

Later, the perpetrators would pay dearly for their actions. On July 1, Panama Lewis had his license revoked in the state of New York, and he never had an official role in another American fight. Resto was suspended for a year, and he never fought again. But this story is not about them, nor do they warrant any more attention than is necessary. Suffice it to say that two did prison time and were banned from boxing. In my opinion, they got off lightly.

The effect of the real-time mugging would be career-ending and eventually fatal for the up-and-coming young fighter out of Tennessee. Doctors informed him he would eventually lose his sight. He quickly fell into deep depression and began drinking heavily. Just months after this fight, he crashed his car and was killed. He was found to be drunk at the wheel, and many speculated as to whether it was a deliberate act of suicide. But did it really matter? He was dead at 22.

To this day, Billy Collins Sr. blames Resto’s trainer for his son’s death. Someone once said boxing has never been overly stringent in its application of professional scruples. Maybe so, but what happened to this kid should forever be viewed as an unforgivable sin.

These days, whenever I watch a young prospect, I can’t help thinking about the fate of a young kid out of the rural South who showed so much promise—a kid who made his family proud, but whose future was taken away in one violent and unfair night in the Garden. He was a kid from a small town in Tennessee who had come to the big city only to meet the dark side of boxing. His name was “Irish” Billy Ray Collins Jr. And if there is a heaven after death, he is there.