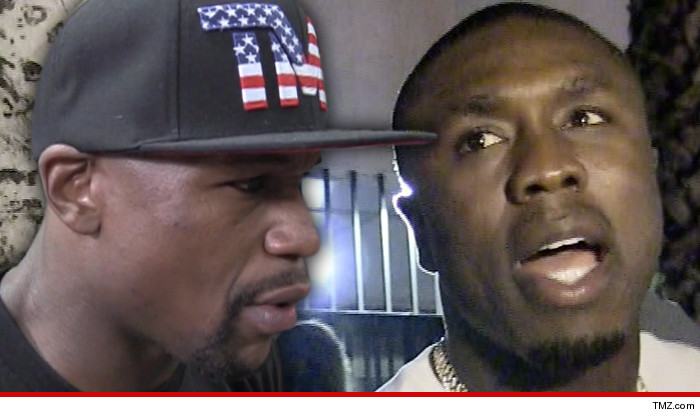 Boxing fans are often their own worst enemies.

That statement especially applies to those who have somehow talked themselves into accepting the upcoming September 12 Floyd Mayweather-Andre Berto bout as anything other than a steaming turd crammed into their grilled cheese sandwich.

Pure and simple, this fight is an insulting cash grab at the fans’ expense, every bit as cynical as Bob Arum’s own efforts to keep his money “in house.” The worst part is that Berto is not even the best “in house” opponent for Mayweather.

We all know the facts in the case against choosing Berto– 3-3 in his last six bouts, overwhelmingly considered damaged goods, no elite-level wins, no really significant high-end wins, period, since 2009. Plus, there’s the fact that at least a half-dozen other welterweights are infinitely more deserving and less insulting to the fans’ collective intelligence.

And if we’re to buy the bullshit about this being Mayweather’s farewell fight, this bout is even more of an insult.

For those new to the Rant, I am not one of those serial Mayweather antagonists. As a matter of fact, I’ve been accused more than a few times of being on The Money Team’s payroll. I respect Mayweather as a pro and as this generation’s finest fighter. I also acknowledge what he has meant to the business structure of this sport and the importance of his example as boxing’s first truly “I’m my own boss” athlete. Whether he’s aware of it or not, his existence, alone, is revolutionary to the sport and to the future generations coming up behind him.

But I wouldn’t be a man if I didn’t acknowledge reality. And that reality is that Mayweather-Berto is a farce.

None of this is to say that Andre Berto isn’t a good guy who will fight his ass off when backed into a corner. Who knows, maybe he even puts up a solid effort against Mayweather. He’s certainly capable of catching a half-snoozing and jaded Mayweather by surprise.

But this isn’t about Berto, really. It’s about a big ticket PPV main event that only stands a chance of being even mildly intriguing if the favorite completely and unexpectedly falls apart.

If Mayweather Promotions valued the fans, this bout would not have been made. But, from everything they’ve seen from their fans, why would they think twice about bilking the faithful?

To his credit, Floyd Mayweather has somehow convinced fans to take pride in how much money HE has. His more brain-challenged fans live vicariously through him, sharing photos of his new $4.8 million sports car on social media while wasting two days’ pay on cheaply made “Money Team” apparel.

Maybe, if you’re a numbskull willing to pay seventy bucks for a Money Team baseball cap, you deserve to be cheated. But you have to assume that the water heads with the TMT t-shirts and the Kings of K-Mart swagger make up a relatively small portion of  Mayweather’s  fan base. Well, I’d certainly hope so, anyway.

If Mayweather has the audacity to sell his most loyal fans a fifteen dollar mall kiosk baseball cap for seventy bucks, then he should at least have the decency to give them two fights a year worth the purchase price.

You can email Paul at paulmagno@theboxingtribune.com or look for him on the strip this weekend selling counterfeit Money Team merchandise out of his 70’s-style van. Paul is a full member of the Burger King Kids’ Club, a born iconoclast, and an ordained minister in the Universal Life Church.