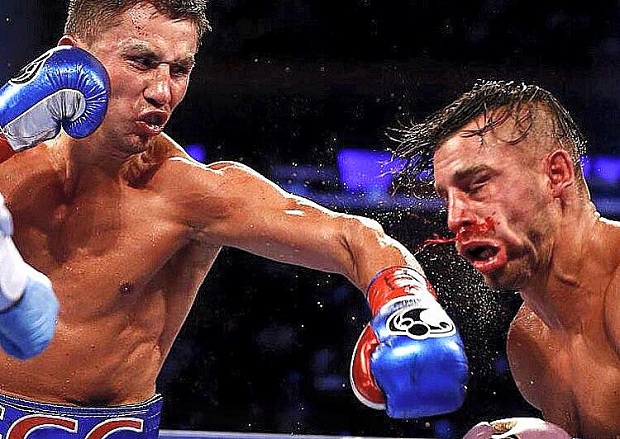 If you believed that David Lemieux had a ghost of a whisper of a chance on Saturday night against Gennady Golovkin, the kindest thing I can call you is an eternal optimist. The truth is that if the Montreal native and IBF middleweight paper champ had a prayer, Golovkin would not have been positioned to fight him and/or Lemieux’s team would not have allowed their guy to take the fight.

But Lemieux was never going to beat Golovkin. Never. I worked it over a thousand times in my head, trying out any number of scenarios, and still came to the same conclusion. Barring some odd accident or pure dumb luck, Lemieux was always going to be the loser. There was nothing in his skill set that would suggest him being able to do anything other than, at best, lose with dignity. And there was certainly nothing in his resume– a resume thinner than even Golovkin’s, by the way– that would suggest he could pull off the massive 15 to 1 upset.

So, why dd so many fans still come into fight night thinking that this would be an awesome, competitive brawl, the Hagler-Hearns of our era?

Blame our wonderful media for that, a media which is full of morons and sleazy liars looking to get ahead by helping sell events for “favored” promoters. And, in this case, because Golovkin fulfills some strange man-fantasy for middle-aged men and has been touching on all the right tickle points for years now, the media is lap-dog eager to pimp for him. This past Saturday just happened to be Triple G’s PPV coming out party, so they went into overdrive selling Lemieux as a real, live opponent despite having absolutely nothing on which to base their assertions.

Notwithstanding recent hardcore fight pimping , though, there’s nothing new about the Golovkin show. He’s the good pet who will cuddle up to your leg, but attack on your command. He’s the lovable, smiling, goofy and non-threatening foreigner. Americans love foreigners who play docile and defer to their whims, who don’t scowl too much and don’t get too “uppity.” Manny Pacquiao played the same routine all the way up to superstar status and, like Golovkin, was allowed a free pass on anything that didn’t fit into the neatly-packaged promotional narrative.

And, also like Pacquiao, Golovkin has been allowed to pick and choose his “threats,” defining his awesomeness on his own terms against fighters who are either lesser versions of himself or flat-out overmatched. Traveling a well-mapped zig-zag path to greatness, both were able to dazzle the casual fan with marvelously brutal performances against essentially hand-picked opposition that distracted from the business machinations being employed to their benefit behind the scenes.

It’s not that Golovkin isn’t good. He is. And that makes the sleight of hand all the more frustrating. What we have is the equivalent of Jimi Hendrix fake-playing to a background tape with an unplugged electric guitar. The talent is real, everything else is phony.

There are legitimate career-defining challenges for Golovkin available– there always were. Don’t be naive. Team Golovkin has opted not to entertain them because, well, they don’t have to. There’s good money to be had in beating re-treads and no-hopers while chasing that one guy with the big name and the belt, who’s just not interested in taking one-tenth the pay for a PPV-level bout at this stage of his career. As long as Golovkin has at least one big name to call out and enough cannon fodder at hand to appease the masses, his team can run this hustle forever– especially with a fawning, clueless, wet-pantied media working to sell the hustle.

And speaking of media members with wet panties, there’s a Part Two to this week’s Monday Rant.

Yes, there was much man love this past week, even more so than usual for a Gennady Golovkin fight week thanks to the addition of “hunky” power punching opponent, David Lemieux.

A special tip of the leather biker hat has to go to The Sweet Science’s Michael “Woodsy” Woods who took traditional fight week coverage and ramrodded it off the beaten path into the press equivalent of a shady intestate rest stop.

Sweet Science readers checking out Golovkin-Lemieux coverage in print and via social media were treated to a week’s worth of oddly homo-erotic big fight coverage from “Woodsy” that focused on chiseled physiques, winning smiles, detonations, and explosions all over MSG…Plus, Friday’s especially icky weigh-in focus on the fighters’ nudity and “undies.” And I quote:

“The happy-faced Kazahk was 159.4, with undies on, and the model-handsome Lemieux was 159.8, sans drawers, so we are a step closer to the anticipated rumble.”

And if this last part of my Rant reminds you long-time readers a little bit of the Paul Magno of a few years back, when this was just a hobby and I had nothing to lose by naming names and going for the jugular, well, welcome to the rebirth of “the bad guy.”

Consider the rest of my career to be one glorious kamikaze mission. Armed with nearly a decade’s worth of true dirt donated to me by other scribes and industry insiders– and believe me, these guys LOVE dishing dirt on their “colleagues”– I finally plan on fighting back against those who tried to starve me (and my staff) out of the business. I really have no reason to hold back any longer. (And, man, some of what I know is truly, truly juicy).

Of course, I’m only human, and I suppose if someone offered me a “consulting” gig in exchange for shutting up, ala “dean” Thomas Hauser, I may consider leaving the skeletons in the closet. But that ain’t gonna happen and, really, that’s just fine. My life has been defined by struggle. I feel comfortable being the hero painted as a villain or, at least, the lesser villain being attacked by the true scum.

So, head’s up…Things are about to get real interesting.

You can email Paul at paulmagno@theboxingtribune.com or do like some writer-groupie nerds do and start your own Monday Rant rip-off. You can also buy his book: Notes from the Boxing Underground! Paul is a full member of the Burger King Kids’ Club, a born iconoclast, and an ordained minister in the Universal Life Church.