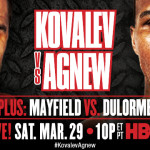 by Tim Harrison This Saturday night, Russian sensation Sergey “Krusher” Kovalev (23-0-1, 21 KOs) will keep busy when he takes on undefeated Cedric Agnew (26-0, 13 KOs) of Chicago, Illinois. The fight will be shown live on HBO starting at 10 PM ET/7 PM PT from the Ballroom at the Boardwalk Hall in Atlantic City, New Jersey. Kovalev has been in the news as a result of rival … END_OF_DOCUMENT_TOKEN_TO_BE_REPLACED 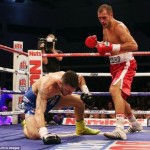 Popular Russian light heavyweight Sergey “Krusher” Kovalev (23-0-1, 21 KOs) is set to defend his WBO title against unknown Cedric Agnew (26-0, 13 KOs) on March 29 at the Boardwalk Hall in Atlantic City, New Jersey. And as Kovalev is a hot commodity at HBO, this stay-busy fight will be shown live in HBO. Kovalev had a breakout year in 2013, winning all four of his fights by … END_OF_DOCUMENT_TOKEN_TO_BE_REPLACED