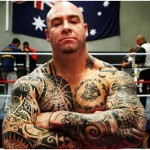 by Ted Sares Inanities, insults, stupid comments, and even fawning dumb down the bar lower and lower. Paulie Malignaggi: “So much hinges on Saturday night,” Paulie confessed. “A win could put me in the conversation for the Hall of Fame. I made a list of goals that I wanted to achieve when I started boxing, and I’ve been checking things off ever since. National amateur … END_OF_DOCUMENT_TOKEN_TO_BE_REPLACED 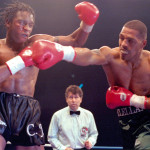 by Fox Doucette Tonight's show features two of the more polarizing Hall of Fame figures in boxing, guys who have their fans who think they're all-time greats and their detractors who think they're massively overrated. In the main event, Joe Calzaghe, who was accused more than once of never fighting the best fighters (since apparently Bernard Hopkins and Roy Jones Jr. are … END_OF_DOCUMENT_TOKEN_TO_BE_REPLACED

It’s been called the fight that defined the 90’s. Today is its 20-year anniversary. Nigel Benn and Gerald McClellan faced off on February 25th 1995 at the New London Arena in Millwall, London, United Kingdom in front of over 10,000 fans and millions more watching on live TV worldwide. The event, co-promoted by Don King and Frank Warren was dubbed “Sudden Impact”. At risk … END_OF_DOCUMENT_TOKEN_TO_BE_REPLACED

by Green MachineWelcome to round 2 of the BTBC's "What if...?" project series. This time, "What if...?" takes a trip back to 1995. Roy Jones Jr. had won the supermiddle weight championship from James Toney at last years end, and Gerald McClellan had made his SMW debut against Nigel Benn, the WBC champ, in February.What we're going to do here, is play out the scenario where … END_OF_DOCUMENT_TOKEN_TO_BE_REPLACED