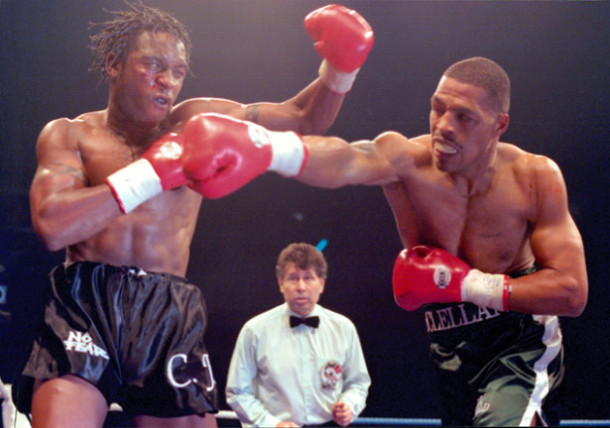 It’s been called the fight that defined the 90’s. Today is its 20-year anniversary.

Nigel Benn and Gerald McClellan faced off on February 25th 1995 at the New London Arena in Millwall, London, United Kingdom in front of over 10,000 fans and millions more watching on live TV worldwide. The event, co-promoted by Don King and Frank Warren was dubbed “Sudden Impact”.

At risk for Nigel Benn was his WBC super middleweight world championship. He had won the title just over two years prior, stopping Mauro Galvano in four rounds, and had made six defenses, winning five and drawing with WBO titlist Chris Eubank in a 1993 unification contest. The “Dark Destroyer”, also a former world middleweight champion, had only lost twice in 42 prior bouts and was an aggressive fighter with a dangerous punch.

Known as the “G-Man”, McClellan, of Freeport Illinois, also had two earlier defeats, but the 27 year old former WBO and WBC middleweight champion had more than put those in the rearview mirror; he had knocked out John Mugabi in one round, and solidified his claim to the middleweight throne with a fifth round stoppage of WBC champion Julian Jackson and would stop Jackson again in the rematch a year later. He was, as promoter Don King would say, a “mini Mike Tyson”.

For McClellan, there was more at stake than just the super middleweight title. Looming in the distance was a unification bout with pound for pound king, Roy Jones Jr. Jones had been just about untouchable to that point, and had just moved up in weight to defeat James Toney, winning the IBF super middleweight crown. McClellan held an amateur win over Jones, and was in line to get a pro crack at the man considered one of the best in the sport.

Pre-fight banter was typical; tough talk between the two fighters, both promising to inflict major damage come fight night, both looking for knockout victories. Emotions were running high, and McClellan’s trainer Stan Johnson would say years later in the ITV documentary “The Fight of Their Lives”, that “He [McClellan] didn’t want to win the fight, he actually wanted to kill Nigel Benn”. It was shaping up to be one helluva night.

The opening round went according to plan for McClellan, and he came within a breath of scoring his fourth straight first round knockout when he had the defending champion down and out of the ring just 35 seconds in. Benn beat the count and continued on heart and instinct for a time while referee Alfred Asaro, who spoke no English, took the liberty of pointlessly placing himself between the two fighters preventing McClellan from mounting a follow up attack on his dazed opponent.

What ensued in the following rounds was epic; a brutal, yet exhilarating back-and-forth contest that saw both combatants give as good as they took. Neither fighter took a step back; with the crowd roaring each time their hometown hero would land a shot, and gasp when McClellan would do the same. As the contest moved along it was Benn, to the surprise of many, who managed to gain the edge. His aggressive, free-swinging style was making this a real fight, and McClellan was getting into much deeper waters than he originally expected.

The war continued over the next six rounds and just as it seemed like Benn was poised to pull ahead, McClellan came on strong in the eighth frame and was controlling the round. A right hand stunned the champion, and a series of follow up shots put him on the canvas for the second time. Once again, Benn would beat the count and survive the round, but he was now behind by two points on Barry McGuigan’s unofficial scorecard.

Entering the ninth round for the first time in his career, McClellan was back in the drivers seat. Benn was tiring, his punches were wild, and more importantly, he wasn’t landing. The momentum of one of those missing shots, a looping right hand, caused Benn to fall forward and butt McClellan, who took a knee to recover. When the fight continued, something just wasn’t right.

Though some would later say that they noticed at an earlier point that McClellan seemed distressed, it was evident to everyone after the head butt that something was wrong. He was blinking constantly, and looked unsteady on is feet.

A minute into the 10th round, an overhand right from Benn dropped McClellan to a knee. Rising before the count, he was cornered by Benn and dropped again less than 30 seconds later. As Showtime announced Ferdie Pacheco exclaimed, “something’s hurting him” Gerald McClellan was counted out. He rose after the count and walked back to his corner, but would collapse seconds later while Nigel Benn celebrated his upset victory, either unaware of how serious troubles were across the ring.

The aftermath of this contest has been covered extensively. After emergency surgery in a U.K. hospital, McClellan returned home to Freeport, Illinois, blind, about 80 percent deaf, and unable to walk unassisted. He’s cared for, as he has been for the past 20 years, by his three sisters. Though he remembers his past clearly, he has short-term memory loss and has no recollection of his brutal encounter with Nigel Benn.

Benn would go on to win two following bouts, then lose three straight before retiring towards the end of 1996. He held a benefit dinner for McClellan in 2007, which saw the former opponents come face to face for the first time since their match up. He has since become a born again Christian, and now lives in Sydney, Australia. He is a member of the WBC Boxing Hall of Fame.

The Benn-McClellan contest was the type of fight every boxing fan wants to see, with a result that makes us wonder why we watch at all.