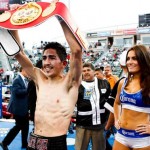 Several ranked fighters were in action this week, but only two changes in the rankings were registered: Leo Santa Cruz, with a dominant win over Vusi Malinga to capture the vacant IBF bantamweight title debuts at #10 in the 118 lb. class. Rolly Matsushita, a Filipino based in Japan, has been moved out of the Top 10 to make room for Santa Cruz. Normally, only a win over a Top … END_OF_DOCUMENT_TOKEN_TO_BE_REPLACED