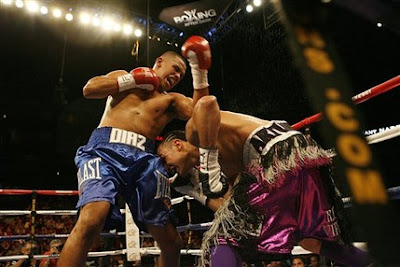 George Bush Intercontinental. Step outside and dig the heat. Thirty degrees of difference from Bush to the city. Thirty minute ride to the Toyota Center. 95 degrees and it’s only ten. Stop for a drink. Plenty of time to kill. Weigh in doesn’t start for another three hours. Paulie “The Magic Man” Malignaggi to be victim to Juan “The Baby Bull” Diaz as he travels north on the scale. Golden Boy putting on the show.

The cab driver takes me out of the way to Lizzard’s Pub. The place reeks of the hip. Lizzard’s tries hard to look like it doesn’t belong to the Greenway Plaza. Lizzard’s averts its eyes from River Oaks. Lizzard’s caters to both. The bartender pins me for a tourist. “I’m here on business,” I tell him. “So am I,” he yukks. He pours a double shot on rocks. I let it sit for a minute. I like to taste my Scotch. “Who do you favor for the fight tomorrow?” He answers like a local, “Diaz all the way.”

I can’t blame them for saying it. Diaz is a beast. Diaz moves forward. Dangerous Diaz digs the body. Baby Bull Bullied Marquez. Check It: 28 February 2009: Diaz takes on #2 Pound for Pounder Juan Manuel Marquez. Diaz comes forward with a purpose. Diaz fires hooks to the body. He backs Marquez to the ropes and punishes him. He brutalizes Marquez for 5 rounds. Marquez figures it out in 6. Marquez moves the fight to the center of the ring. He cuts Diaz with an uppercut in 8. He finishes it in 9. Diaz is on his back in the center of the ring. It’s the second knockdown of the round. The ref waves it off. We remember that Marquez is a great fighter. We remember that Diaz gave him a hell of a fight. We write off the knockout.

Malignaggi comes off of a win against a nobody. The fight is forgotten. We remember his TKO against Hatton. Malignaggi should have done better. Hatton has heart. Hatton has power. Hatton doesn’t have finesse. Malignaggi fights on the back foot. Malignaggi channels Prince Hamed. He digs Hamed. Hamed inspired him. He bobs and weaves. He spins out of the way. He throws punches from all angles. Hamed did all this. Hamed did things wrong and made them work. Hamed packed dynamite in his fists. Item: Malignaggi isn’t Hamed. Hatton, unHurt hands Malignaggi a hiding. Verdict: Malignaggi can’t handle the pressure. Fighting with feather fists fail to foil pressure fighters.

During the build-up, Malignaggi got his excuses in line. Expect a homecooked, hometown decision from Houston. Looking back: Chris John vs. local boy Rocky Juarez on the Marquez vs. Diaz undercard. John boxes smart and shows us he’s for real. Juarez fights hard. Juarez tries. Juarez is one dimensional. John wins it 116-114. All three judges score it a draw. Marquez was smart. He took it out of the judge’s hands. Malignaggi isn’t a finisher.

Malignaggi wasn’t born yesterday. He can smell a screwing. He wanted a larger ring. He wanted the fight at the Jr. Welter limit. He wanted neutral officials. Promotions ixnay on all demands. The ring will be small at 18ft. The fight will be at 138. The judges are from Oklahoma, California and Texas. One is of Mexican decent. Malignaggi says “I’m going to have to knock him out to win.” He says it like he can do it. We know he can’t.

The weigh in is the usual local who’s who. Diaz fans outnumber Malignaggi 10:1. Both fighters in their skivvies. Malignaggi starved down to a slim 138. Diaz plumped up to a big 137. Diaz sports the freshman fifteen to all his fights. Diaz has Golden Boy behind him. Golden Boy brings Bernard Hopkins to the weigh in. Golden Boy brings Shane Mosley. Malignaggi has one guy in his thick New York accent in the crowd. They face off for the photo op. The New Yorker yells “There’s your punching bag, Paulie!” The rest of the crowd cheer their boy. The rest of the crowd don’t expect it to go the distance.

Sometimes I go with the rest of the crowd. Malignaggi looked awful in his last big fights. I didn’t see him taking the pressure. He hadn’t showcased his footwork in a long time. Top guys made him look bad. B Level fighters made him look sloppy. He didn’t have what it took to work on top.

Diaz is what I look for. Diaz throws punches and punishes. Diaz makes men regret ever trying to hang. If Hatton can crack the Magic Man then so can Diaz…
The crowd got ready in the parking lot. The crowd worked around the high beer prices. They tailgated instead. They came in half drunk. They finished the job before Daniel Jacobs entered the ring to kick off the televised fights. They were already rowdy. It would get worse. The televised fights were going the distance.
Fans heckled. Fans howled. Jacobs wins convincingly over ten. Fans keep drinking. Fans fake fight. They throw air jabs. They land crosses on invisible opponents. High fives. Guerrero looks to redeems himself over twelve. Guerrero gets cut. Guerrero fights smart. Guerrero hangs on. He wins on the cards. He wins for real.

I go for another drink as I wait for the Diaz fight. The fans are loving it. It’s left field at Dodger’s Stadium. It’s Red Sox at Yankee Stadium. The fighters are only contenders. These are hometown fans. They get like this for any reason.

The ring announcer echoes through the hallways. Fans flock for seats. Malignaggi gloms Arturo “Thunder” Gatti’s intro. Malignaggi got a call from Gatti after the Cotto fight. Gatti complements a durable warrior. The crowd boos. The crowd jeers. They throw drinks. Drinks fall short. Drinks douse dozens in the front.

Diaz starts his walk. His music is drowned out. A fan turns to me, “He’s gonna knock Malignaggi the f**k OUT!” I can’t disagree. The bell rings and they get to it. Diaz does what we expect and comes forward. Malignaggi does what we expect and moves back. Malignaggi is cut in the first round. Diaz disposes of dull jabs. Diaz fires off bombs. Diaz hits air. He glances the Magic Man’s face. He hits arms and elbows. It’s expected. It takes a round to figure it out.

Four rounds in and it’s two to two. Diaz pressured forward. Diaz clipped Malignaggi good. Malignaggi clowns shaky legs. His legs really are shaky. It’s round five and the crowd goes nuts. Diaz throws a series of hooks. One, two, three, four–all against a high guard. The crowd cheers anyway. Diaz is cut bad and keeps fighting through it. If anything he proves he can fight through blood.

Diaz finds his distance. Diaz digs deep. Malignaggi’s has trouble getting back to plan A. Malignaggi loses six and seven. He leans back with his hands down. Diaz wings shots and they clip the Magic Man’s face. His head bobbles like Hamed’s. Houston cheers. They smell blood. It’s going well.

Malignaggi rethinks his strategy. Malignaggi can’t trade. He needs to get on his toes. He needs to weave low, he needs to circle again. The bell rings. He comes out and fires jabs. Throw three and land one. Keep Diaz thinking about jabs. Sneak in a right. Move lateral and stick a hook. Throw three jabs and back off. Rinse. Repeat. Malignaggi is back in a groove. He’s durable at least. Diaz can’t get in close like Hatton. A fight breaks out behind me. Beer is thrown. Furious fans fumble through the seats. Meanwhile Malignaggi takes eight through eleven.

I finish my drink.