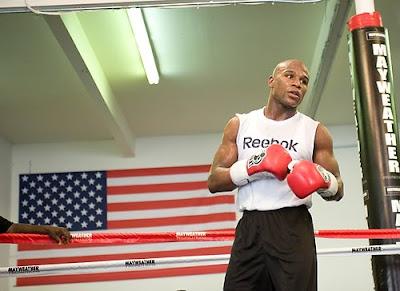 It’s hard to defend anyone who “makes it rain” in night clubs or makes the kinds of ridiculous boasts that Floyd Mayweather Jr. does.

Yet, here I am, once again making the case for Floyd while leaving myself wide open for well-timed counters.

For me, likeability as a fighter and likeability as a human being are two very different things. I don’t need to see fighters as “Regular Joes” or “nice guys” in order to appreciate them. What Mayweather does and how he lives outside the ring is about as important to me as whether my butcher is a swell guy.

Inside the ring, Mayweather has never given us anything but the best. He’s always in shape and puts forth an honest effort, doing what he does at an incredibly high level. Contrary to his critics, Mayweather is not a “runner” in the traditional sense; At least not in the Hector Camacho mold of a fighter always looking to avoid confrontation.

Mayweather is a counter-puncher and what counter punchers do is size up their opposition and pick them apart after finding weaknesses. The former welterweight and pound-for-pound champ does this with such mastery that it’s practically libelous to characterize what he does as “stinking up” a fight, as his former promoter, Top Rank’s Bob Arum, said a couple of days ago when asked about his one-time star.

And therein lies the problem behind Mayweather’s poor reputation within the boxing community and the public relations nightmare that his post-Top Rank career has become. While experienced promotional spin doctors like Arum take shots at him and influence media and fans alike, nothing valid is offered up by Team Mayweather. There is simply no voice delivering the counter to the critics’ wild left hooks.

Not surprisingly, the attacks began when Mayweather separated from Top Rank in an ugly split that stole headlines and ended in legal action. Suddenly, in a matter of weeks, the apple of Bob Arum’s eye became a cowardly villain who was looking to take the easy route to unearned millions. Mayweather’s past victories were played down as mismatches and any current activity was criticized and met with the refrain of, “but why is he ducking so and so?”

When he moved up to welterweight, he chose to continue with his planned bout against Zab Judah despite Judah’s surprise loss to Carlos Baldomir a few months earlier. The media and the fans ripped into Mayweather, questioning the decision to fight Judah and insinuating that he’s avoiding the new lineal 147 lb. champ, Baldomir.

After beating Judah, he went on to dominate Baldomir to capture the crown and many of the same critics who called for his head for “ducking” the true champ, suddenly began dismissing Baldomir as a lucky club fighter who had no right being in the ring with Mayweather anyway.

As lineal champ, Mayweather leveraged his position into a huge money fight with Oscar De la Hoya and then another huge money fight against Ricky Hatton, who he was accused of ducking just about a year earlier.

Then, with fighters like Miguel Cotto and Antonio Margarito emerging as legitimate threats to his reign as lineal champion, Mayweather decided to pack it up and call it a career.

The announcement of his retirement played right into the image that was being sculpted by his critics, both professional and amateur alike. The impression given by his retirement was that he was simply avoiding Cotto and Margarito, two Top Rank fighters, by the way.

And, once again, lacking a knowledgeable voice from Team Mayweather, nobody was there to point out the fact that when Mayweather ruled 147, Cotto had just barely emerged as a force and Margarito was still rebuilding following his loss to Paul Williams. Neither Cotto nor Margarito would become logical foes for Mayweather until well after he had already retired.

Now, Mayweather’s back and so are his critics.

As he prepares to battle Juan Manuel Marquez this Saturday in a truly tough tune-up after nearly twenty months of inactivity, the cries of “he’s ducking so and so” once again abound and Bob Arum has re-initiated his offensive while the boxing media repeats his every talking point.

But, before piling on, please examine how, exactly, Mayweather is different from any other fighter in his position. Compare him to the beloved Manny Pacquiao who, like Mayweather, moved up in weight against questionable opposition and also leveraged his fame into money fights with De la Hoya and Hatton.

The only difference between Mayweather and Pacquiao is that Manny has Bob Arum, an experienced and shrewd boxing voice behind him to talk up Manny’s strong points and smooth over any criticisms; Mayweather has, literally, nobody.