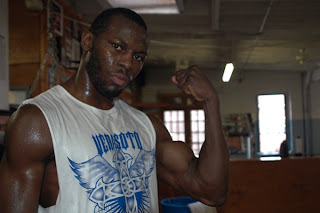 Former IBF Cruiserweight World Champion, and current #1 ranked IBF contender, Steve ‘USS’ Cunningham is keeping himself busy as he waits to reclaim the coveted Cruiserweight crown by hosting a free camp for the children of Philadelphia at Rock Ministry in Philadelphia on Saturday 17th October 2009.

‘USS’ Cunningham, who lost the IBF Cruiserweight title by a close split decision, after the magnificent December ‘08 ‘Fight Of The Year’ nominated battle with Tomasz ‘Goral’ Adamek, created the camp to teach children the value of physical fitness and healthy nutrition, as well as provide them with the confidence and tools to achieve their health and fitness goals.

Taking a break from training, at the James Shuler Memorial Gym in West Philadelphia, father of two, ‘USS’ Cunningham spoke briefly about obesity in children and the camp. “Back when I was young, we did not have all the technology and distractions available today, we played outside way more than kids do now and I believe that is one of the reason’s childhood obesity is such a huge problem. It is estimated that there are roughly 9 million obese children in the US, all of which face obesity health related issues and complications, and that is really scary. I want to give the kids at my camp tips on how to balance their lives and live more healthy and hopefully avoid the health complications that come with being overweight from such a young age.”