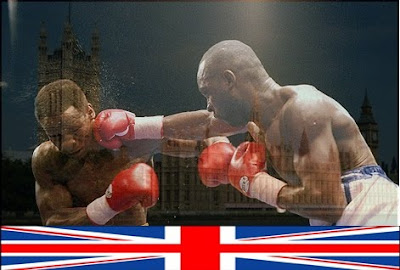 Welcome to the second UK Beat Report, a monthly wrap-up of the fight scene in the United Kingdom.

The month was marred by the death of Darren Sutherland (4-0, 4 KOs). The Irish bronze medallist was found dead by his promoter Frank Maloney in the boxer’s flat. Sutherland was a talented fighter and definitely one for the future.

September started off with a bang as a featherweight duel took place in the north-east. There was a decent crowd at Middlesbrough watching the highly anticipated featherweight rematch between John Simpson (20-6, 8 KOs) and Paul Truscott (13-2, 1 KO). Simpson stopped Truscott early on in the 10th on cuts.

Tyson Fury (9-0, 7 KOs) scored a controversial points victory over John McDermott (25-6, 16 KO) at Brentwood Centre, Essex. The contest was for ‘Big Bad’ John’s English Heavyweight Title. Terry O’Connor scored the fight 98-92 to Fury, while others at ringside had it 4 rounds to McDermott. The BBBofC have announced that they want the rematch to take place in the next 90 days. Another lanky heavyweight, Tom Dallas (7-0, 5 KOs) stopped Hungarian journeyman Mihaly Nemet (12-16-1, 4 KOs) in superb style in the first round. Dallas, who’s 6’6’’ and weighed only 229 lbs, knocked Nemet down 3 times and the bout was stopped 01:14 in Dallas’ quickest stoppage yet. Ashley Sexton (8-0, 4 KOs) also continued his rise with a first round technical knockout victory over Darli Gonvalves Pires (17-8-1, 8 KOs).

Clinton Woods has announced his retirement from the sport. He recently dropped a unanimous decision to Tavoris Cloud (20-0, 18 KOs) for the vacant IBF light-heavyweight title. Junior Witter (37-3-2, 22 KOs) will carry on despite calls for him to retire. He will move up to challenge at welterweight.

Bernard Dunne’s (28-2, 15 KOs) reign of the WBA title in a very deep junior featherweight division and his first defence didn’t last more than three rounds against Thai Poonsawat Kratingdaenggym (39-1, 28 KOs). He was in line for a major pay-day against Celestino Caballero (33-2, 23 KOs). Tyson Fury (9-0, 7 KOs) fought to a points victory on the undercard.

David Haye (22-1, 21 KOs) was ringside at McDermott-Fury and said that his preparation for his upcoming title tilt against Nikolay Valuev (50-1, 34 KOs) is going according to plan. Adam Booth, Haye’s trainer, said it was likely that Haye would weigh around 230 lbs in the Valuev fight on the 7th of November in Germany. Haye is looking to spar with Tyson Fury ahead of his fight at Nurenburg. The long-awaited rematch between Sam Sexton (12-1, 5 KOs) and Martin Rogan (12-1, 6 KOs) has been postponed due to a back injury suffered by challenger Rogan. Their first bout got stopped by a mouse under Rogan’s left eye when it appeared that Sexton was out on his feet. The bout will take place at the Odyssey Arena, Belfast on the 6th of November.

Nathan Cleverly (18-0, 8 KOs) headlined at York Hall against lanky Englishman Courtney Fry (13-3, 5 KOs) on October the 9th. He won by 8th round stoppage over former Commenwealth Games champion Fry. Cleverly has been nominated to fight for the vacant European light heavyweight title against Antonio Brancalion and the fight could take place on December the 5th. On the undercard, Derek Chisora (11-0, 6 KOs) fought for the first time since his biting ban last March and won by thir round stoppage. The Heavyweight Prizefighter III draw was made by a certain ‘Iron’ Mike Tyson. Mike Holden (10-9-1, 6 KOs) was pulled out of the competition as he was floored by Tomas Mzarek (4-22-5, 3 KOs) in the third round of their scheduled four round bout. Michael Sprott (31-14, 16 KOs) also pulled out after the tragic death of his sister.

Audley Harrison (26-4, 19 KOs) won the tournament with a stoppage victory over Irish outsider Coleman Barrett (10-1, 2 KOs). Harrison still believes he could get a world title-shot next year with the help of Barry Hearn. Danny Williams (41-8, 31 KOs) was stunned by Carl Baker (9-4, 6 KOs) and will probably retire by the time of the next beat report.

The dream domestic lightweight contenst between John Murray (28-0, 16 KOs) and Jon Thaxton (34-11, 19 KOs) took place at Altincham, Chester on October 3. The bout was for the vacant British lightweight strap after Murray failed to make the weight by 1.5 oz in his previous bout against Scott Lawton (26-5-1, 5 KOs). John Murray won by fourth round stoppage and after the fight, Jon Thaxton retired from the sport.

Esham Pickering (34-9, 13 KOs) was defeated in an European featherweight title bout against Oleg Yefimovych (17-1, 11 KOs) by third round knockout. He has admitted that he will not hang up his gloves yet.

Carl Froch (25-0, 20 KOs) will begin his quest for super middleweight domination with a fight against Andre Dirrell (19-0, 12 KOs) in a battle of skill versus will at Nottingham. The fight is on the 17th of October for Froch’s WBC super middleweight title.

The next report will be at the end of October and will concentrate on David Haye’s heavyweight challenge against giant Nikolay Valuev. The Hayemaker could be set to take the British heavyweight lead from Lennox Lewis (41-2-1, 32 KOs) the only modern day heavyweight champion to have beaten every opponent he has ever faced.