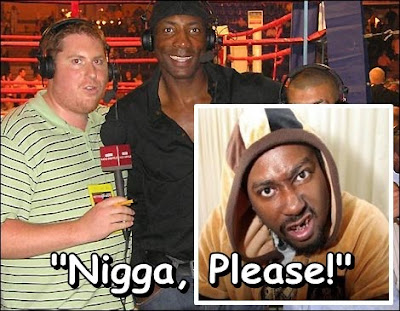 Johnny Nelson is back for his second “Nigga, Please!” award, after another ridiculously over-exaggerated quote on the vacant European junior lightweight title fight between Scott Lawton and Leva Kirakosyan.

As part of Sky Sports’ post-fight analysis of Kirakosyan’s third round stoppage of Lawton, Johnny Nelson commented that Kirakosyan was a “dragon slayer in England”, who holds a (3-1, 3 KO) record in Britain against domestic club fighters.

No offence intended to Kirakosyan, but at 35, he’s no world beater and not even considered a contender. Without disrespect to Lawton, who’s not a 130 pound fighter, is he really a dragon? He was floored in the first forty seconds, given a standing count in the second, and stopped in the third.

With no logic linking to the wildly inaccurate quotation from Nelson, another “Nigga, Please” Award is in the post for the ex-cruiserweight champ.