On the undercard, Puerto Rican featherweight standout Carlos Velasquez (12-0, 10 KOs) impressively scored a spectacular fourth-round knockout over late replacement Ira Terry (24-3, 14 KOs). Velasquez wobbled Terry in the third round and closed the show with a huge overhand right in the fourth. 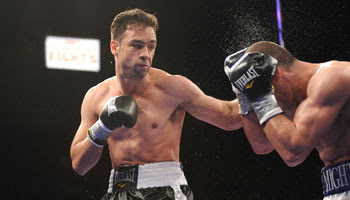 ncasville, Connecticut – In a better looking match-up on paper, Delvin Rodriguez (25-4-2, 14 KOs) retained his regional belt as he won a unanimous decision over a durable Mike Arnaoutis (24-5-2, 10 KO’s). Scores of the bout were all comprehensively in favor of Rodriguez, 117-110, 119-108, and 118-109. Rodriguez utilized his jab to setup hooks and right hand as he got back to winning ways in his hometown.

Undefeated junior middleweight prospect Demetrius Andrade (10-0, 7 KOs) won a six-round unanimous decision over journeyman Geoffery Spruiell (8-9, 2 KOs). All three judges scored the fight a shutout win for Andrade 60-54. Andrade had Spruiell often in trouble as he worked off his jab to land his scoring shots.

Las Vegas, Nevada – Charismatic lightweight Sharif Bogere (15-0, 9 KOs) defeated Martin Tucker (7-6, 3 KOs) via first-round retirement win after Tucker quit on the stool after a clash of heads at the Rio Casino in Las Vegas. Apparently, the clash of heads caused a cut over Tucker’s right eye. The doctor said he could continue in between rounds but Tucker claimed he could not see.