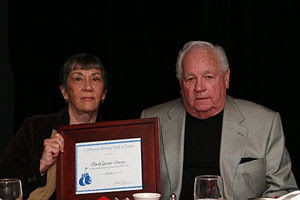 Boxing has lost two well-known characters in the sport this week, with referee Arthur Mercante, 90, and promoter Lorraine Chargin, 79, passing away this weekend.

Arthur Mercante is regarded as one of the all-time great referees, officiating in high-standard fights such as Ali-Frazier I. Lorraine Chargin co-promoted with her husband Don Chargin, known as ‘The Dragon Lady’ (pictured right, with Don) because of the fearsome side of her personality.

The BTBC extends our greatest sympathy to the families of Arthur Mercanre and Lorraine Chargin.