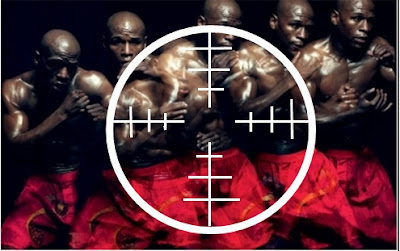 As Shane Mosley and Naazim Richardson prepare for the daunting task of trying to beat one of boxing’s modern day masters, The Boxing Tribune has set out to aid the duo and help establish the blueprint for beating Floyd Mayweather.

No fighter is undefeatable and, while not an easy job at all, Mayweather is surely not invincible.
Sure, all of this is easier said than done, but the point is that it can be done…It’s just going to take a hell of a fighter to put it all together:
It’s not you, it’s me 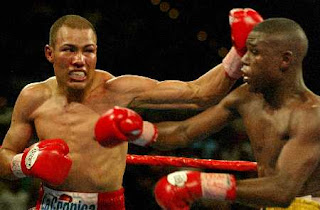 There is one major mistake trainers make when preparing for Floyd Mayweather- They put too much focus on Mayweather. They study tapes, dream up strategies and make plans to counter and befuddle Mayweather’s unique style. I’m not saying that this is a bad thing. Mayweather opponents should familiarize themselves with Mayweather’s style and trainers should come up with a proper strategy to nullify it.

But the answer to the Mayweather riddle doesn’t lie within Floyd’s steel trap defense or sharp focus. Frankly, there are no weaknesses to exploit, no glaring lapses in technique.
Instead of focusing on Floyd, a trainer would be better suited focusing on his own guy, making him sharp and as error-free as humanly possible. Taking a fighter and making him a flawless paragon of his own style is key.
Play the Angles 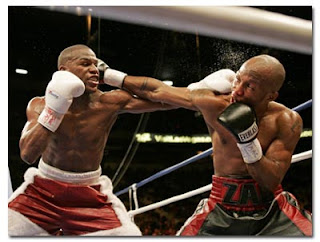 Fighters learn their craft in 1-2 steps…Mayweather works on 1.5, 1.7, 2.3…Off to the side and always at odd angles, Mayweather is a mystery to most….and as the fight progresses and desperation sets in, that mystery deepens.
What anyone fighting Floyd has to understand is the basic logic taught to us in Geometry: The shortest distance between two points is a straight line.
The fighters who have success with Mayweather are those who can throw sharp, tight, straight punches. A sharp jab has been pointed to as a key to solving the riddle, but sharp, compact straight rights and lefts can also lead to success.
Swinging for the fences will lead to zero success against Floyd; Tight, straight compact shots, at the very least, will cut the distance and put some leather on Mayweather.
Waste not, Want not 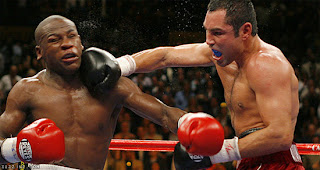 Mayweather feasts on wasted movement. When his odd angles throw opponents off balance or his defensive stance forces foes to over-commit, his job becomes frighteningly easy; It’s really just a matter of stepping off and unloading on off-balance, defenseless targets.

Make no mistake about it, if you overpursue, you will get pot-shot to death from a supremely quick-fisted and always in command Mayweather.
Fighters who have found success against Floyd have been mature, fundamentally sound boxers who don’t burn through logic and reason by trying to take the fight to Mayweather. Instead, they focus on what they do best, stay within their own skill set and don’t make a counter puncher’s job easier by deviating off the script.
These are the types of fighters who make Mayweather’s life miserable. These are the guys who Mayweather, in order to ensure the victory, has to go after and beat rather than just wait for exploitable errors to take advantage of.
The “Money” Mayweather of 2010 has become spoiled and has relied too much on being so much more fundamentally sound and technically superior to his opposition; He hasn’t been made to force the issue against a fighter who simply refuses to give Floyd anything to exploit and counter.
Jose Luis Castillo, Oscar De la Hoya and Zab Judah are examples of fighters who “wasted not” and, as a result, gave Mayweather some of his closest battles.
“Think Buddha”
“There is nothing more dreadful than the habit of doubt… It is a thorn that irritates and hurts; it is a sword that kills.” — The Buddha
To beat Mayweather, one has to focus on the here and now. You have to take each exchange as it comes and focus on doing the right thing on a case by case basis.
Be fundamentally sound, don’t waste punches or movement, keep punches short and straight, make Mayweather take the intiative and make him pay for every exchange you get into…Those are the nuts and bolts keys to beating Floyd Mayweather.
The psychological key to the entire task, though, may be just as vital. Anyone fighting Mayweather will be frustrated and demoralized at times…The secret is being strong enough to push those moments aside and focus on the big picture.
Beating Mayweather is no easy task and it becomes increasingly more difficult when doubt begins to creep in and affect the sharpness of a fighter’s performance. Mayweather’s vanquisher will focus on winning rounds and will have the maturity to put the setbacks aside, little by little, taking the fight away from Floyd and forcing him to deviate from the script.
“A jug fills drop by drop.” — The Buddha
This Saturday, May 1st, we’ll see if Shane Mosley has the mental and physical goods to handle this huge task.