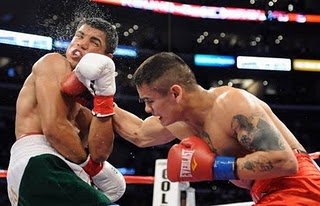 Victor Ortiz won for the third time since Marcos Maidana handed him a heavy sixth-round technical knockout beating eleven months ago, and despite shutting out a cooked Nate Campbell, Ortiz showed no signs that he’s adapted his predictable style that came undone against a hungrier, less-skilled opponent.

His ferociousness has made him a marketable fighter, along with a backstory which will always make fans root for him. But when he fell short of the promise land, his bloodthirstiness deteriorated into a tentative boxer that lacks killer instinct, which normally are the first words associated with the Golden Boy prospect.

Ortiz’s profile will always be overshadowed by his infamous post-fight interview with Max Kellerman, where he let slip the worrying quote for any talented boxer “I don’t think I should get beat up like that.” There will always be a question mark over his mentality, which made some experts pick Nate Campbell to roll back the years and lure him into a testing brawl.

Like Bigswa mentioned on his exceptional podcast, Golden Boy would not choose Campbell for Ortiz unless they were utterly convinced that he was shot. They are still in the re-mapping process with Ortiz, and were trying to get some rounds against a faded name fighter to re-build his status.

Campbell clearly has no business at 140 pounds, and had nothing in the ring. But what left me disappointed with Ortiz’s performance was his lack of desire to make a statement as he made no effort to chase the stoppage, a complete contrast to promotional light welterweight rival Amir Khan.

I just get the feeling that Richard Schaefer is waiting for Devon Alexander to drop one of his titles and gift-wrap it to Ortiz to hold hostage on HBO World Championship Boxing. After re-watching his performance, I can’t help but predicting that Ortiz will fold against anyone who offers a little bit of pressure, someone who holds a slight advantage in either speed or power.

There’s one fight that Victor Ortiz badly needs, and that’s a rematch with Maidana. Maidana stole Ortiz’s pride, taking away the lighthearted side that we saw a peek of when he whooped overmatched step-ups Jeffrey Resto and Mike Arnaoutis.

And until he defeats Maidana, I can’t see Ortiz competitive against any of the titlists. When he’s matched with any resistance, who knows how Ortiz will react. He has the talent to mix it up at the top, and he showed glimpses of it against Campbell as he perfected combinations with slick movement. But I don’t think he knows it. Unless he finds that ruthlessness that made him an awkward opponent, or maybe even a simple change in setup, Ortiz will suffer in the shadows of Golden Boy’s new blue-eyed boy, Amir Khan.