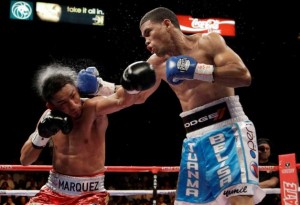 Welcome to the latest edition of “Late Stoppage,” the boxing recap that puts it all into perspective:

Recap: Marquez was far from being the shot warhorse that some predicted. As a matter of fact, Marquez had quite a few quality moments and even came very close to dropping the defending WBO featherweight champ in the fourth round. But Lopez kept coming forward and, in the end, Lopez’s edge in size, youth, and strength proved too much for the game Mexican warrior. Marquez didn’t come out for the ninth round, citing a right shoulder injury. Whether the injury was legit or not, the last two rounds were all Lopez and it was clear that he was slowly grinding down the former two-division champ of 118 lbs. and 122 lbs.

What this means to boxing: The stage is now set for the long-awaited Juanma Lopez-Yuriorkis Gamboa bout next year. Lopez promoter, Bob Arum, stated that Lopez would first fight in his native Puerto Rico at some point in March and then move to fight Gamboa in June.

Recap: Green actually looked decent when on his horse and flicking out the jab, unfortunately for him, Johnson found his way inside and started roughing up the much-maligned challenger. At the end of the eighth, Johnson connected with a wide, looping right that sent Green to the canvas and another, sharper, right on the way down. Green argued that it was an illegal shot to the back of the head, but was unable to beat the count.

What this means to boxing: Glen Johnson moves into the semi-finals of the Super Six tournament and gets another payday. The chances are slim that he can compete with the rest of the batch in the tourney, but he has defied the odds before. For Allan Green, close the book on an erratic, unsatisfying career. At 31 years of age, he will have to begin all over again and work out the mental blocks that seem to plague his game.
___________________

Recap: In a dull, strategic first nine rounds, Judah managed to outbox the tough Matthysse, but the crowd at the Prudential Center woke up in the tenth when a Matthysse straight right hand sent Judah to the canvas. Legitimately hurt, Judah managed to hold on tightly for most of the last 2 and a half rounds to win a razor thin split decision.

What this means to boxing: Judah did nothing to market himself into the tough 140 lb. class with this lackluster performance, but he will meet Kaizer Mabuza for the now vacant IBF jr. welterweight title, formerly held by Devon Alexander. The gutsy Argentine, Matthysse, will hang around in the background, having proven to be a worthy opponent and a tough day at the office. Matthysse-Maidana, at some point, would be a a true fan-favorite war.

What this means to boxing: If Guerrero is finally settled into the lightweight division and his personal problems are out of the way, there’s no reason to believe that he wouldn’t dominate the 135 lb. division. Guerrero is a physically gifted fighter who is still learning on the job, but he’d still be more than a match for anyone at 135.
____________________

Recap: In the upset of the night, journeyman Keb Baas shocked defending WBC jr.flyweight champ, Omar Niño Romero, and took his world title after a tough 12 round battle. Romero went down in the first and eighth rounds.