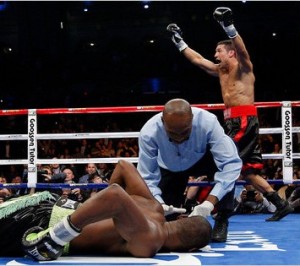 Recap: A potential fight of the year turned into knockout of the year as Martinez, following a first round that was slightly in favor of Williams, knocked his opponent out with a crushing left hook that Williams never saw. There was no need to count as Williams was out cold before even hitting the canvas. Martinez was making the first defense of his lineal, and WBC, middleweight title.

What this means to boxing: Martinez is now the undisputed middleweight champ, but unification bouts with the other champs (Felix Sturm, Sebastian Sylvester, and Dmitry Pirog) will be tough to make unless Martinez is willing to fly overseas. And, even then, the others may not want to mess with the lineal champ. Martinez may be forced into a lesser fight for a lesser payday in the absence of real challenges at 160. For Williams, this loss may push him off the radar now. He won’t likely get another big fight in a very long time. He’s still dangerous and world-class, but now he’s given everyone a reason not to fight him.

Recap: After a slow start, Ornelas put on the gas and made life very difficult down the stretth for the defending WBO super middleweight titlist, Stieglitz. The defending champ, who was looking to make a case to be included among the elite of the talent-rich 168 lb. class, fought at a controlled pace throughout the bout and won rounds by being just a bit more aggressive than his Mexican opponent. The judges’ scorecards were 117-111 all the way around. The Boxing Tribune scored the fight 115-113, also for Stieglitz.

What this means to boxing: While this performance may not have put Stieglitz among the elite, it did establish him as a real player in the deep 2nd tier of the division, alongside guys like Sakio Bika, Librado Andrade, Allan Green, and Edison Miranda (among others).