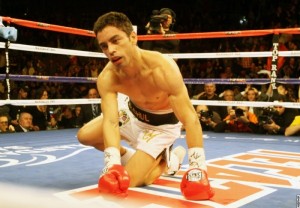 Howdy and welcome to another edition of Magno’s Monday Rant, the only boxing column guaranteed to not be littered with fawning, drooling puff bios and re-written press releases.

I believe in Karma. In my personal life, business, and everything in between. I’ve found that my conduct certainly, sooner or later, always comes back to me. Hence, my distaste for phony baloney ass kissing and politically correct gibberish.

But let’s talk about Karma as it pertains to matchmaking in boxing.

When you put two evenly-matched fighters into the ring, good things happen. It’s as simple as that.

This weekend we saw two evenly-matched bouts on one televised card with the end result being nothing but positive for the sport.

Donaire-Montiel and Jones-Karass II were well-booked and significant bouts. The former saw the emergence of a real star and the latter pushed along a second-tier player to that next level of credibility. The HBO telecast gave us blood, guts, power, intrigue, and some real, honest to goodness, shock appeal. In other words, it gave us what we want in a boxing show. None of that would’ve been possible without smart, positive-minded matchmaking.

Of course, good matchmaking doesn’t guarantee a classic, but for the most part, it provides us with overall positive results that benefit the sport.

For example, Timothy Bradley-Devon Alexander was most definitely not this generation’s Leonard-Hearns, but even with a dud of an ending and rather pedestrian action throughout, the sport benefited from this contest– Alexander was eliminated from the top tier and it paved the way for the division’s best fighters, Bradley and Amir Khan, to set up an even more significant contest down the line. Even out of a flop, good things often come when the intention is there to make a good fight.

Now, let’s look at the flip side of the Karmic Matchmaking coin, also on display this past weekend.

On Friday, 23-year old jr. welterweight prospect, Mercito Gesta rolled over 36-year old Genaro Trazancos in a bout that was truly a waste of everyone’s time. More competitive struggles have been seen on security camera footage of senior citizens being mugged.

Given that Gesta had stopped Trazancos six months prior and the guy had already been stopped three times in a six month period in 2010 (and had lost eight of his last nine), the three round slaughter did nothing to enhance the career of Gesta. It didn’t make the promotion look good nor did it make for quality TV viewing.

Building records is part of the game and I accept that, but this was just obscene.

More obscene was what would happen the following day as Felix Sturm defended his WBA middleweight title against Ronald Hearns.

Ever since Sturm’s people made the cynical move of enlisting Hearns as cannon fodder for their ninth defense of the WBA crown, the result was all but etched in stone.

On the day of the fight, what we got was seven listless rounds of Hearns, who looks like Dad, but fights like Mom, flicking a worthless jab at Sturm’s gloves and then crumbling into a heap after getting tagged with the first real punches landed.

Sturm looked like a punk for his opponent selection, Hearns looked sickly, and, except for a few German Sturm fanatics, the fans had their time wasted. And let’s not even mention all of the middleweights out there who were better suited to the task than the son of The Hitman, who shouldn’t have been on anyone’s top 50 middleweight list.

Even in this “belt-centric” modern era of prize fighting, we still expect more from the champions of the sport.

So, before dealing with the sanctioning bodies, state commissions, promoters, or the media, boxing reform needs to start with some very basic lessons in Karmic Matchmaking.

— Epix, a premium movie channel struggling to survive amidst the giants of the industry, has purchased the rights to air the March 19th Vitali Klitschko title defense against Odlanier Solis. The channel, currently available to over 30 million homes nationwide is looking to add add subscribers by picking up bargain-basement fights currently unavailable in the US market. Aside from the Klitschkos, the channel is also rumored to be interested in Latin American action to appeal to the Mexican-American market.

— If you haven’t heard the Ashton Kutcher vs. Giovani Segura airplane story, get the first-hand account in The Boxing Tribune’s exclusive interview with Segura.

— For those feeling good about a nice weekend of boxing, here’s something to bring you down: 45-year old heavyweight, Bert Cooper will be fighting next Saturday, February 26th in Atlanta. “Smokin'” Bert Cooper (37-22, 31 KOs) is best known for his two title bouts- a legit war with Michael Moorer, resulting in a TKO 5 loss in 1992, and a TKO 7 defeat to Evander Holyfield one year earlier. This will be Cooper’s second fight after being inactive for eight years. For those concerned about Cooper’s well-being, you need not worry. He’ll be going up against “Big G,” Gabe Brown (18-13-4, 12 KOs), a journeyman who hasn’t won via stoppage since 2005.

— On that same card, Roy Jones is booked to make a special appearance alongside a Playboy Playmate. ‘Nuff said.

and Let’s close the week with a wonderful piece of mind-bending stupidity from Examiner.com.

In this episode, Dennis “D’Source” Guillermo is chastising Yahoo! Sports’ Kevin Iole for being less than journalistic during the Pacquiao-Mosley Vegas press conference. Here’s the entire portion of Guillermo’s column, exactly as printed:

I couldn’t make this stuff up if I tried.

Thanks for taking the time to read, fight fans…See ya next Monday.

Paul Magno is the host of over thirty conspiracy theory podcasts and holds the Guinness World Record for oldest functioning laptop. Paul is a full member of The Burger King Kid’s Club.