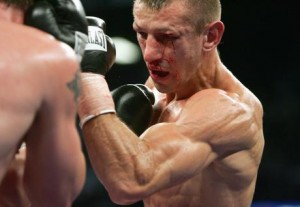 Tomasz Adamek (43-1, 28 KO) and Kevin McBride (35-8-1, 29 KO) will square off this Saturday, April 9th, in a heavyweight bout. The bout will take place in Adamek’s adopted hometown of Newark, New Jersey, and will be shown on Integrated Sports Pay-Per-View, presented by Main Events Promotions, as part of its Brick City Boxing series from The Prudential Center

Adamek, the former WBC light heavyweight and IBF cruiserweight champion, will be making his 6th appearance in the heavyweight division. After wins over former champion Andrew Golota and title contenders Chris Arreola and Michael Grant, all that stands in the way of Adamek and a shot at an already signed heavyweight title is the 37-year old McBride.

Since his flagship win over Mike Tyson in 2005, a 6th round TKO victory, McBride has lost 4 of his last 6, with 2 of those losses coming by way of knockout.

Scheduled for the undercard action will be 23-year old Andrzej Fonfara (16-2, 7 KO), a native of Warsaw, Poland, taking on Ray Smith (9-5, 3 KO). This bout will be contested in the light heavyweight division.

Another New York native, Joselito Collado (11-0, 3 KO), will open the broadcast against Rafael Lora (11-3, 5 KO), in a non-title featherweight bout.