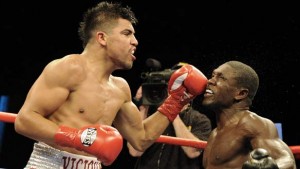 From the very first round it became clear that the fans were in for something special when Ortiz dropped the favorite, Berto with a heavy-handed combination that seriously hurt the defending champ.

In the second, Berto evened things out by scoring a knockdown with a hard counter right hand that landed flush on the southpaw from Oxnard.

The next three rounds featured both fighters teeing off with monstrous power shots that had the fans in attendance on their feet. Although still throwing and landing, Berto looked the worse for wear, seemingly still shaking off the effects of the big shots he took in the first.

The sixth round ended up being a gut check for the much-maligned Ortiz, who retired in the sixth round of his 2009 bout with Marcos Maidana. Sent hard to the canvas by a Berto counter and then out on his feet as the Haitian-American battered him, Ortiz reached back and landed a huge shot that put Berto down in the closing seconds of the round.

Frames seven, eight, and nine were rest rounds for both fighters as Ortiz kept his distance when possible and Berto worked to tie up whenever the action got close.

Ortiz lost a point in the tenth round for hitting behind the head, but closed the round big by stunning Berto with some strong shots up close.

Although clearly behind and in need of something big, Berto was drained and couldn’t respond in the eleventh while Ortiz continued to press forward and land thudding shots on an opponent who had gone back to resting on the ropes, as he had down when stunned earlier in the contest.

Berto came out strong in the final round, but wasn’t able to cause much damage to Ortiz, who looked relatively fresh and capable of going at least six more rounds.

After some early “feeling-out” rounds, Salido put on the gas at the end of the fourth and started landing some big right hands that shook up the defending champion.

Salido dropped Lopez hard in the last portion of the fifth with the undefeated hometown favorite barely making it to the bell.

The challenger continued landing some big shots in the sixth and seventh, but Lopez was taking the punches better, countering, and managing to shake his opponent on a couple of occasions.

In the eighth, Salido starched Lopez again with a huge right hand that put him in bad shape and backed him up against the ropes. Although still half-heartedly throwing punches back, it was Salido landing the big shots that would eventually cause the referee to step in and wave off the contest.