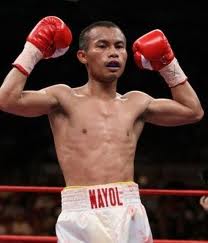 Former jr. flyweight titlist, Rodel Mayol (27-5-2, 21 KOs) of the Philippines and 18-year old prospect, Jose Benavidez Jr. of Los Angeles will be in action on the May 7th Pacquiao-Mosley undercard in a free internet stream prior to the pay-per-view telecast.

Mayol, who is managed by Manny Pacquiao, will be taking on journeyman, Javier Gallo (17-3-1, 9 KOs) in a scheduled eight-rounder.

Benavidez is set to face club fighter, James Hope (6-7-1, 4 KOs) in a six round contest. Hope has dropped three of his last four via stoppage.

Stay Tuned to The BTBC Fan Forum for stream info.