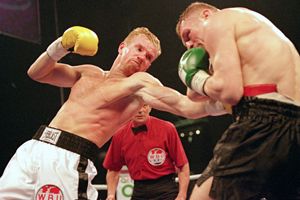 Earlier today, our esteemed Editor-In-Chief wrote an incisive piece about Bob Arum’s takeover of the who’s who between 140 and 154, using Manny Pacquiao as his bargaining chip to corner the market. Further back than that, Don King pioneered the idea of widely-distributed pay-per-view as a boxing revenue model, moving championship fights off of Wide World of Sports and into the wide world of King’s ego and bank account. For the mainstream boxing media, this has been a great big gravy train, as the unspoken agreement has been “kiss the right ass, we’ll cut you in on a piece.” And, of course, the PPV-buying public, seduced by the idea of “championship boxing”, has bought hook, line, and sinker into the idea that there is no such thing as a great fight without an alphabet soup (or, in a nice bit of faux-legitimate chicanery, the Golden Boy-controlled Ring Magazine) belt attached to it. Everyone below that Pacquiao/Klitschko/Hopkins level is a palooka, their fights too unskilled or raw to be worth taking seriously, or so the narrative goes.

Well, if I may be excused contributing a bit more vulgarity to a sport rife with it, bullshit. Every week on this site, I am given a forum to pontificate while reporting the news of the lower and mid-tier cards that make up ESPN’s Friday Night Fights series. Other folks in the blogosphere (but, conspicuously, not in the mainstream media) have a similar take on shows like ShoBox or any of the many Spanish-language telecasts at a similar level of competition like Telefutura’s Solo Boxeo. Someone is reading this stuff, otherwise there wouldn’t be any point in writing it. Someone is watching it, otherwise there wouldn’t be any point in airing it. And it’s not just the boxing insiders looking for the next batch of talent to poach for the big-name cards. Certainly those guys are watching (the late-career arc of Micky Ward effectively proves it), but there is a small and clued-in die-hard fanbase that knows that the real entertainment to be had in the fight game is in the up-and-comers and the once-contenders trying to salvage their reputations on fight shows that cost nothing more than the cost of the customer’s cable bill. (Note that I’m treating ShoBox as a “free cable” event simply because very few people pay for Showtime purely to watch boxing—they’re more likely getting it for the movies and shows and getting boxing as part of the deal. By all means, feel free to disagree with me in the comments.)

We’ve seen some absolutely dreadful “championship” fights lately. The less said about Pacquiao-Mosley, the better. Mosley-Mayweather was awful, Hopkins-Pascal was (despite the great storyline) pedestrian, and Andre Ward-Allan Green in the Super Six was quite possibly the most boring fight for a belt I’ve ever personally seen. Sure, there’s the occasional Donaire-Montiel display of astounding talent to keep the sport alive, and Juan Manuel Marquez’s KO of Michael Katsidis was a gorgeous fight, but on the whole, you are no more likely to see greatness for a belt than anywhere else in the sport.

Contrast that with the ultimate example of a guy who will never be discussed among the all-time great champions, but whose career is virtually synonymous with the scrappy, working-class, all-action TV fighter. Alert readers hardly need me to mention Micky Ward’s name here. His fight with Emanuel Augustus on FNF would easily have been worth fifty bucks as a pay-per-view. Not a living soul who watched that fight would have felt taken in by that; indeed, seeing it for free on television felt like stealing. Ward-Gatti I was the greatest fight I have ever had the pleasure of witnessing, and round nine of that fight was the single most incredible three minutes of action in the history of the sport. Was it a profound display of technical skill? Of course not! Ward and Gatti couldn’t have been any easier to hit if they’d kept their arms at their sides like Buckingham Palace guards. It was the display of heart, the ebb and flow, the brutal side of the Sweet Science that everyone who turns on a fight wants in their heart of hearts to see. Do you even remember who won that fight? (Ward by majority decision) Does it matter?

That’s something that you can’t put a price on. In most walks of life, you pay fifty bucks to see something you could normally get for free, you expect some kind of quality premium there. A pay-per-view event should be better than a free event simply by that metric. You get what you pay for, right? Yet PPVs have been a total crapshoot, no more likely to produce a great fight than turning on ESPN2 after a long workweek.

This is why the boxing public, we the fans, should be keeping our credit cards in our pockets when a guy like Bob Arum throws what is sure to be a craptastic fight at us and wants more than the cost of a good date night for the privilege. I didn’t buy the Pacquiao PPV because I knew it wasn’t worth the $64 I could spend on something else. When people complained that Mosley turtled and Pac refused to go in for the kill, all I had to say to that was what the hell were you expecting? You got exactly what anyone not trying to make a splash with a “bold prediction” could’ve told you was going to happen. You’ll get it again if you buy Pacquiao-Cintron or Pacquiao-some guy in the parking lot with a Top Rank contract or Pacquiao-anyone (yes, including Juan Manuel Marquez at this point in the two men’s careers and at the expected 144-pound catchweight, fully two divisions above JMM’s natural weight.)

You want to feel like you’re getting value for your time and money as a fan? Watch Ruslan Provodnikov. Watch Peter Manfredo. Hell, watch Chris Arreola on FNF tomorrow night (love him or hate him, at least he’s entertaining.) Watch the four-round swing fights and undercard who-dats and take some time out of your life to go to a club fight in the nearest city to wherever you are now. You’re every bit as likely, if not more so, to see a great fight. And you won’t have to kick yourself knowing you gave a ton of money to the Bob Arum Propaganda Machine to watch sub-par boxing that is supposedly the highest echelon of the sport. And if you really want to blow $64 on something boxing-related? Send check or money order and make it out to me and put “pay-per-view fee for boxing column” on the memo line. At least I ripped you off honestly.

Fox Doucette covers Friday Night Fights for The Boxing Tribune. Among writers, he’s the People’s Champion. Find him on Facebook at facebook.com/MysteryShipRadio.