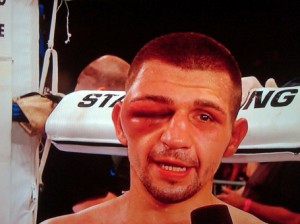 About a month ago, your friendly neighborhood commentator proposed the idea of a Fight of the Year championship belt in order to reward all-action fighters who always bring the goods on television. After watching tonight’s Friday Night Fights main event, the Fight of the Year Council of One wants to sanction a rematch for the vacant title at junior middleweight. Pawel Wolak (29-1-1, 19 KOs) and Delvin Rodriguez (25-5-3, 14 KOs) are both deserving contenders for such a belt.

Tonight’s main event was short on finesse and long on action. Wolak came out in the early rounds walking through Rodriguez’s attempts to box on the outside the way Mike Tyson used to walk down his opponents in his heyday. Working the body, going upstairs, keeping Rodriguez on the ropes, Wolak raced out to an early lead in the opening rounds, never letting off the throttle and never letting Rodriguez hit him cleanly. For a brief moment it looked like Delvin Rodriguez, a career junior welterweight and welterweight, had given up a bit too much size moving up to 154 against a guy who had fought at middleweight at one point.

All that changed in the fourth round. A hematoma reminiscent of Hasim Rahman against Evander Holyfield (indeed, referee Steve Smoger’s comment about it provided the headline for tonight’s article) developed very quickly over Wolak’s right eye, leaving him effectively blind to Rodriguez’s left hook and changing the entire timbre of the fight. Wolak kept coming, but Rodriguez was able to catch him with hooks and uppercuts and take away Wolak’s advantage on the inside. The Polish fighter won the early rounds, but the Connecticut-based Rodriguez was able to turn the momentum and come back strong to earn a majority draw.

Judge Tom Schreck had it 97-93 for Rodriguez, but both Steve Weisfeld and Julie Lederman scored it 95-95, as did The Boxing Tribune. Teddy Atlas had the fifth round even, making his final score 96-95 for Rodriguez. This was no robbery, no dishonest talk, no BS like we saw last Saturday. This was exactly the sort of fight boxing needed to remind us all why fans keep coming back. Judged properly, refereed exquisitely (not once did Smoger break the fighters on the inside except to separate them at the bell), and handled perfectly by the ringside physician, tonight’s main event is what boxing should be. Let’s give credit where it is due—and let’s give credit to Pawel Wolak who, despite being unable to see out his right eye for the latter half of the fight, did not punk out and get the fight stopped—Devon Alexander (just for example), this is how you act like a fighter.

The co-feature gave us a hard-fought bout between Raymond Serrano (16-0, 8 KOs) and Daniel Sostre (11-4-1, 4 KOs). Serrano looked very strong out of the gate, but the drop in weight (from 147 in his last fight in April down to 141¼ for tonight’s fight, showed signs of sapping his endurance. From the fourth round on, Serrano kept falling in and clinching rather than working cleanly, and it is less a credit to Serrano’s ability and more an indictment of Sostre’s lack of ability to recognize an opportunity that Serrano was able to ride out the middle rounds before turning the heat back on in the seventh and eighth.

The decision came unanimously Serrano’s way, as judges Weisfeld and Lederman (and Teddy Atlas) had it 78-74 and judge Waleska Roldan (and this writer) had it 77-75, all for the undefeated prospect. This should be a learning experience for Raymond Serrano, since he didn’t win the fight so much as Sostre lost it. Serrano should move back up to welterweight where he is naturally stronger and he should work on his conditioning in order to avoid mid-fight lulls like the one he had between rounds three and six.

Teddy Atlas suggested a rematch between the combatants in the main event tonight, who provided a legitimate Fight of the Year candidate. This writer would like to join the chorus of those calling for such a rematch, and let Wolak and Rodriguez get the payday they deserve from it. HBO, Showtime, ESPN, whoever has the money for the purse bid, these two guys need to get into the ring and scrap again. Hell, they need to sign to fight twice more so they can put on the best trilogy boxing’s put forward since Ward-Gatti a few years ago.

Next week, Friday Night Fights is back on the West Coast in Cabazon, California for a main event between Anthony Dirrell (22-0, 19 KOs) and Kevin Engel (18-4, 15 KOs). The co-feature brings us unbeaten prospect Joseph Elegele (12-0, 10 KOs) taking on Lanard Lane (12-1, 7 KOs), who is coming off a year layoff after his first pro loss to Mike Dallas Jr. The fights air Friday, July 22, 9 PM Eastern/6 PM Pacific, on ESPN2, ESPN3.com, and on ESPN 3D. The Boxing Tribune will have full coverage with a preview and recap.

Fox Doucette covers Friday Night Fights for The Boxing Tribune. His column, The Southpaw, appears on Thursdays. He wonders how ESPN knew a Fight of the Year would be a perfect birthday present for him a day in advance. Fan mail, hate mail, and birthday wishes can be sent to beatcap@gmail.com.