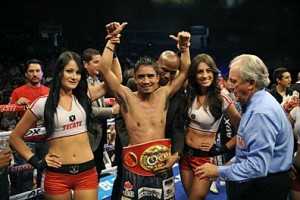 After the dust settled and the ref called for a technical decision to be issued, it was Mexico City’s Rodrigo Guerrero (16-3-1, 10 KOs) who came away with the judges’ decision as well as the vacant IBF super flyweight championship over San Antonio’s Raul Martinez (28-2, 16 KOs).

Fought evenly throughout, Guerrero and Martinez, fighting a rematch of a November, 2010 bout which Martinez won via close split decision, exchanged heavy leather and momentum shifts as neither fighter was able to seize control for extended chunks of time.

The closest to a dominant moment came at the end of the third round, when a straight left hand from Guerrero wobbled and sent Martinez stumbling to the canvas. The bell saved Martinez from a potential knockout loss and allowed him to recover and turn in a strong performance in the fourth.

An accidental clash of heads in the sixth round opened a gash over Martinez’s eye that would eventually bring about the premature end of the bout.

This was both fighters’ second shot at a world title. Guerrero had been defeated by Vic Darchinyan via unanimous decision for the WBC/WBA super flyweight title in March of 2010. In Martinez’s previous failed title grab, he was stopped in four rounds by Nonito Donaire in IBF flyweight title bout.