Amir Khan and British Broadcaster Sky have this week announced a reconciliation after a noisy divorce last year.

When Britain’s Amir Khan swatted away the challenge of the mercurial Zab Judah earlier this year, there 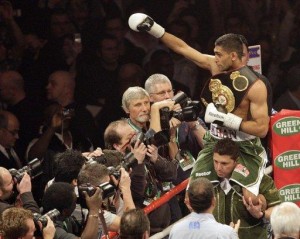 was a certain amount of ooh-ing and coo-ing from both sides of the Atlantic at the young man’s future prospects. Suddenly, he was finding his star aligned with our sport’s brightest luminaries, and being talked of as future Mayweather and Pacquiao fodder. Khan’s relationship with British television and the British public has been very much a love/hate affair, but this week he’s been able to announce a new relationship with top British broadcaster Sky television.

The truth is that most British boxing followers have not been prepared to invest too much in Amir Khan, because after his first round blasting by Breidis Prescott in 2008 it was widely believed that he’s been one big punch away from getting knocked out again, despite some impressive wins since both in the States and at home. Furthermore, it’s becoming de rigueur in British boxing that anyone who enters the paid ranks with an Olympic performance behind them has been handed a comfy route through to the big money. After Audley Harrison made a mockery of his Olympic gold medal by making a mockery of his pro career, Khan knocked over one too many patsies on live TV in his early days for the public to warm to him, particularly while home-grown talents like Joe Calzaghe and Ricky Hatton were perceived to have done things the hard way, and paid their professional dues without the leg-up of an Olympic medal.

Khan invited further alienation when he signed up to a gold-coated pay-per-view TV deal with British broadcaster Sky on the eve of the Prescott debacle. Rumour has it that Sky committed to a ten-fight deal, only to see their golden egg cracked in the very first outing, so that the partnership was forced to limp through Khan’s next three or four fights as he began his rehabilitation. Khan’s shows were carried on the coat-tails of some significant pay-per-events in the US, as his paymasters at Sky realised that Khan alone simply could not carry a UK audience.

That’s not entirely fair on Khan, but it’s the way of the world. From the first cynical marketing exercise post-Olympics, when Mario Kindalan was flown in from Cuba for a live televised remake of their Olympic final, only to surrender abjectly not only the fight but a ten year unbeaten record, it had seemed that Amir’s path was too carefully plotted. In addition, the empty charade of those early contests were played out as main events on live terrestrial TV, at prime time on Saturday nights, when most young fighters learning their trade would be boxing at the fag end of a dinner show in some God-forsaken seaside shanty-town.

What made it worse for Khan was that for all the planning, he still managed to come unstuck. His backers failed to heed the warning signs thrown up by knockdowns in fights to an aging Michael Gomez, and a feather-punching Willie Limond, and believing that they had the real deal on their hands and could finally let loose, they agreed to the fight with young puncher Prescott, who went and knocked their boy senseless.

So it was only three years ago that Khan’s career appeared to be in tatters after that debilitating setback. He swore after the fight that the defeat was attributable to a gung-ho attitude in the ring, whilst on-lookers shook their head and muttered that he was fragile around the whiskers and would be knocked out again should he share a ring with anyone possessing anything more than a feather-duster punch.

After the Prescott debacle, Khan’s relationship with the British public didn’t improve. Now confirmed in their suspicion that he had been gifted a route to the top by virtue of an Olympic silver medal and a canny promoter in Frank Warren, Khan’s often superlative ring performances seemed to be over-shadowed by a stubborn reluctance on the part of the fight-going public to give him his due. Before the Dmitriy Salita fight Khan made the mistake of attributing that reluctance to the colour of his skin, when in truth it’s simply that the British expect our sportspeople to come up the hard way, perform creditably, and lose graciously.

Frank Warren, as canny a promoter as any, managed a minor miracle in re-drawing Khan’s battle lines and maneuvering him back into contention, only to be rewarded by being ditched in favour of Oscar’s Golden Boy outfit, ostensibly so that Khan could take advantage of the lucrative US market, and join up with Freddie Roach where the technical wrinkles that led to the Prescott loss could be ironed out.

Warren has shouted loud and long about the sterling job he did for Khan, before and after the youngster unraveled under Prescott’s powerful assault, but even he can’t deny that Amir’s move stateside has been anything other than the making of the man.

Sky kept patience with Khan as he re-rehabilitated himself in the States, but eventually the relationship broke down when it became clear in the weeks leading up to the all-British Paul McCloskey affair that the pay-per-view sales were desperately poor. Sky pulled out, citing a poor undercard as the reason for the split, and Khan’s people were forced to run to a new and little known broadcaster, Primetime, who have aired his fights to minimal audiences since.

Now, at just twenty-four years of age Khan is the WBA and IBF light-welterweight champion, and is firmly ensconced in the thriving surroundings of Freddie Roach’s Wild Card gym in Los Angeles. He has Marco Antonio Barrera’s and Paulie Malignaggi’s scalp on his resume, together with 2010’s fight of the year with Marcos Maidana in which he showed a degree of resilience under fire that would shame those early critics. Now highly marketable in the US, Khan has a string of contenders lining up to knock him off his perch.

He defends his titles on 10th December in Washington against Lamont Peterson, who he’s expected to beat handily, and there is talk of Khan taking on WBO champion Timothy Bradley, who beat up on the aging Joel Casamayor this last weekend and looked good doing so. It may be, however, that Bradley is far too good a fighter, and far too poor a publicist, to generate the kind of risk/reward that would qualify him to share a ring with King Khan. If that fight can’t be made then Khan has made it clear he wants a move up to 147 pounds, where skirmishes with the likes of Mayweather and Pacquiao await.

In this new Amir Khan world, Sky have come a-knocking again, and signed the Bolton boy to a three-fight deal after a patching up of their differences. Interestingly, those fights won’t be on pay-per-view, but doubtless both parties are hoping that Khan can worm his way back into the British public’s affections in time for those welterweight showdowns when the financials will look after themselves.

So Sky are banking on Khan again, though one suspects that a key component of their investment strategy is solid faith in the much-lauded coaching skills of Freddie Roach, who they will expect to produce a Khan slick and fast enough to keep that fragile chin out of harm’s way as he moves up to compete with his sport’s true elite.