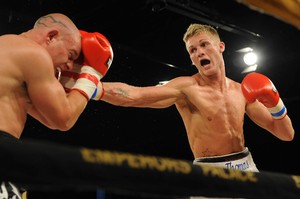 Oosthuizen (17-0-1, 12 KOs), ranked sixth in the super middleweight division by The Boxing Tribune, will be taking on Serge Yannick (14-1, 7 KOs) from Cameroon in a scheduled twelve-round contest. The rising 23-year-old, Oosthuizen, already holds wins over Aaron Pryor Jr., William Gare, and Saul Roman as well as a draw with Isaac Chilemba in his short 4-year career.

Yannick, who now resides in Australia, had a fairly solid 2011 with wins over Australian contenders Shannan Taylor (SD 12) and Jamie Pittman (TKO 2). Prior to last year, Yannick had fought nobody of note.

Mabuza , best known for a RTD 6 win over Kendall Holt in 2010, has dropped his last two bouts– getting stopped in seven rounds by Zab Judah for the vacant IBF junior welterweight title in 2011 and dropping a twelve-round unanimous decision to welterweight Chris van Heerden six months after that.

Wills, a southpaw, has no major fights of note, but has captured a few regional titles in his native Australia against club-level opposition.