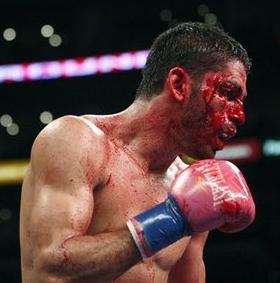 In the beginning, the bout looked like the set-up it was intended to be– a marginal challenge in a WBC lightweight title eliminator en route to a big fight rematch against WBC champ, Antonio DeMarco in July. Early on, Linares boxed well and even staggered Thompson in the middle of the first round.

In the second, Linares was doing what he does best when a wild right hand from Thompson cut Linares over the left eye and a follow-up barrage of shots put the heavy favorite in bad shape and, eventually, on the canvas. Linares would beat the count, but was a bloody mess.

With blood gushing from his cut, the referee called for a time out and took Linares to be checked by the ringside physician. The bout was officially waved off at the 2:27 mark.

On paper, at least, this should mean a Sergio Thompson-Antonio DeMarco title bout at the Home Depot Center in July.

For Linares, this is his second loss in a row and third loss overall– with all three losses coming from Mexican fighters.