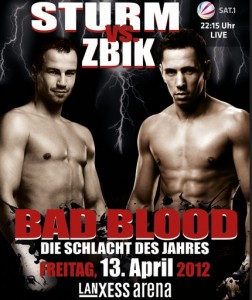 Sturm, who is 13-2-2 in three separate reigns as a world middleweight titlist, is looking for a reaffirmation of his status as an elite middleweight after back-to-back poor showings and controversial decisions.

In June of 2011, Sturm bested Matthew Macklin in a close, disputed split decision. Then, in December, he registered an even more controversial draw against unheralded Martin Murray.

Against Zbik, a fighter whose name recognition comes from his one bout with Julio Cesar Chavez Jr. more so than his thirty previous fights, Sturm will have some extra eyeballs on him. An impressive performance against the former titlist will go a long way towards erasing his last two outings. It will also buy him time and a little leniency in terms of who he fights next.

Zbik’s only major bout, against Chavez Jr. in June of last year, resulted in a close majority decision loss and a relinquishing of his paper WBC middleweight title. Prior to the Chavez bout, Zabik’s resume was wafer-thin, with a pair of wins over Italian fringe contender, Domenico Spada, being the only fights of note to distinguish the rest of his seven-year career.

Still, the German born fighter showed poise and class in his loss to Chavez and won a rightful place in the division’s Top 20. Zbik is currently ranked 14th in the middleweight division via The Boxing Tribune’s unbiased world rankings methodology.

On the undercard, heavyweight Denis Boystov (30-0, 25 KOs) stays active and continues to mop up the remnants of once-promising heavyweights against one-time  prospect, Dominick Guinn (33-8-1, 22 KOs).

After a hand injury sidelined Boystov for most of 2010 and 2011, the Russia-born German resident has fought twice since September of 2011, registering stoppage victories over journeymen, Matthew Greer and Darnell Wilson.

Guinn is coming off consecutive one-sided decision losses (to Kubrat Pulev and Amir Mansour). Over the course of his eleven-year career, Guinn’s best wins have come against Michael Grant and Phil Jackson. His highest profile losses have been suffered at the hands of Eddie Chambers, Tony Thompson, James Toney, Siarhei Liakhovich, and Monte Barrett.

Still, the 36-year-old Guinn has yet to be stopped in forty-two pro fights and likely represents the best opponent of Boystov’s seven year career.