She’s made Olympic history, and the 2012 Olympics are still months away.  On Tuesday, May 15th, Marlen Esparza became the first woman in United States history to qualify for Olympic boxing competition and the first female boxer to qualify for the London Games. 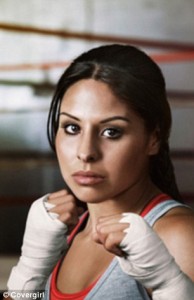 Esparza, a featherweight from Houston, Texas, secured her trip to London with a 28-13 victory over Vietnamese boxer Luu Thi Duyen in the second round of the Women’s World Championships in Qinhuangdao, China.  The tournament will also be the qualifier for 23 other female Olympic hopefuls. There will be 36 competitors in all, the remaining 12 to be determined by an international commission.

Unfortunatley, Esparza would go on to lose in quarter final action the next day, dropping a 16-8 points loss to China’s Cancan Ren.  The loss takes her out of the tournament, but will allow her to start immediate focus on the London games.

This summer’s London Olymics will be the first time women’s boxing will be featured among it’s competitions.  While the men’s division consists of 10 weight classes, the women have just three: featherweight-112, lightweight-132 and middleweight-165.  The lightweight and middleweight women’s representatives are yet to be determined.