We could save a lot of time and energy if we just dropped the whole idea of PEDs testing and went back to assuming everyone was juiced up. We could even go back to pretending that the drug testing currently in place isn’t there just to trap a few low-end users as a token gesture of pretend due diligence. Because, really, as things are shaping up now, this new wave of volunteer testing is little more than the equivalent of tossing a few ice cubes into an erupting volcano’s molten lava.

Two major fights have recently bitten the dust under the weight of true random testing by the Voluntary Anti-Doping Agency (VADA). In about a two-week span of time, Lamont Peterson flunked out of his big-ticket rematch with Amir Khan and, just this past Friday, Andre Berto failed his way to boxing limbo one month before a main stage grudge match with Victor Ortiz. 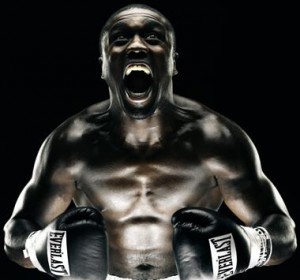 The ensuing controversy over the failed tests has been a revenue buster and public relations disaster for Peterson and Berto. But both do have a reasonable case to make in their defense– at least reasonable enough to be heard.

Peterson, who tested positive for a synthetic testosterone, claims to have been administered testosterone pellets under a doctor’s supervision as part of a hormone treatment unrelated to athletic performance.

AAG Health, an anti-aging clinic that specializes in hormone replacement therapy, questions the use of the substance as a performance enhancer. According to the clinic, testosterone pellets “are not considered to be safe or effective for the enhancement of athletic performance.”

Meanwhile, Berto showed traces of nandrolone in his VADA test, but denies any use of a banned substance at all.

The infamous Victor Conte of BALCO fame, who was employed as Berto’s nutritionist, has gone on record as saying that his fighter’s positive test is from a contaminated supplement Berto took outside of Conte’s supervision.

“I had absolutely nothing to do with Andre Berto’s positive drug test for nandrolone,” Conte said in a statement to the media. “Andre admitted that he recently took some supplements that were not provided by me and did so without my knowledge. It is possible that one these supplements was contaminated with trace amounts of nandrolone and caused his positive test result.”

There has been a significant history of false positives for nandrolone in the past, often caused by contaminated supplements. That’s something Team Berto can hold on to if/when the time for a defense comes.

Of course, Peterson and Berto could just be cheaters trying to fly under the radar with some back-end chemical enhancement. But there is enough gray area in the case of both fighters to warrant a hearing and some fair consideration.

So, who exactly will be giving these fighters their due process?

The Nevada State Athletic Commission (NSAC) will be handling the licensing issues for both fighters (as will other commissions where either fighter may apply), but they will be doing so with second hand information taken from tests not done under their jurisdiction.

In the Peterson case, the NSAC only found out about the positive test result twelve days before the Peterson-Khan bout was due to take place. They then took it upon themselves to inform all other parties.

It seems to me that somebody should’ve thought about all of this before initiating something that could cost fighters millions of dollars and forever damage their reputations.

I’m the first to endorse real PEDs testing and I applaud any and all efforts to clean up the sport, but  how can we even consider such a major reform without having all of these little details sorted out?

Make the testing part of the commission protocol or establish an independent commission with real, binding power to oversee the testing. The often-discussed national boxing commission would be perfect for situations like this, but we all know that’s not likely to happen anytime soon.

Now boxing is left with one of two options. The athletes and power brokers could dig in, roll up their sleeves, and start tying up the loose ends so that future testing works with commission authority. Or they can simply make it so that nobody ever volunteers for this type of testing again.

The latter would effectively and perhaps permanently kill any idea of real PEDs testing in the sport. The commissions, who live in fear of canceled fights and lost revenue, won’t be enacting real testing anytime soon and if the athletes stop volunteering, then it’s all over.

Anyone who has followed the sport for any significant amount of time knows that boxing rarely errs on the side of decency and fair play, so we kinda know where this is headed.

Debating VADA, USADA, and all variants of testing protocol is, really, akin to discussing which band-aid to put over the gash on your jugular. PEDs testing in boxing is only as good as the  infrastructure behind it.  Any attempt at real reform in boxing will, ultimately, be pointless without making real changes to the underlying structure of the sport.

Good luck with that.

A pox on any self-appointed ratings guru who places Mikkel Kessler on their Top Ten list at light heavyweight this week.

For those that don’t know, Kessler scored an impressive, neck-jerking, Sportscenter-making fourth round KO of Allan Green this past Saturday in his 175 lb. debut.

This should be a real litmus test for the pundits and an eye-opener for fans. Kessler, with one win at light heavyweight (against an unranked Allan Green), doesn’t belong among the division’s Top 10.

Whoever ranks Kessler will be essentially copping to the fact that their list is based on pure popularity and guess work. No matter how well-known he is and how beautiful his knockout was, “The Viking Warrior” shouldn’t be ranked ahead of fighters who have already been competing in the 175 lb. class and scoring key divisional victories for years.

By the way, our World Rankings will be updated by late Monday afternoon. Read our methodology and decide for yourself if we’re on the right track.

You can email Paul at paulmagno@theboxingtribune.com or watch his plight as he is “cruelly” cyber-stalked by fake mean bloggers who secretly diddle themselves to old Ring Magazines. Paul is a full member of the Burger King Kids’ Club, a born iconoclast, and an ordained minister in the Universal Life Church.