First, I must legally acknowledge the fact that I “stole” the title of this week’s  column from 19th Century Russian writer, Fyodor Dostoevsky. When I don’t mention this, some fake mean blogger has a Twitter tizzy and says really snarky things about me.

Anyway, this week’s Rant will revisit the Notes from the Underground concept, dedicated to short, bite-sized nuggets of controversy and (in)sanity from the boxing world, filtered through the jaded eyes of this happy, bomb-throwing boxing outsider.

Have no fear, Bob Arum’s on the case.

Bob Arum’s calls for an investigation into the Pacquiao-Bradley decision are about as believable as ESPN’s Dan Rafael vowing to get to the bottom of “The Case of the Disappearing Footlong Chicken Parm.” It’s a joke, a total insult to everyone’s intelligence. 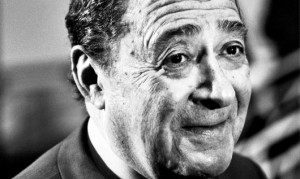 I originally felt that the heat was too much for this one and that, maybe, the outcome would somehow be overturned. However, after seeing an interview with Nevada Senator, Harry Reid, I realized the folly of ever counting on decency from the old boy’s network.

Reid, who counts Bob Arum among his financial donors and personal friends, is an old high school buddy of judge, Duane Ford and assured fight fans that Ford is an honorable, honest guy. Still, Reid has stated that he’s in favor of a probe.

“I feel confident there has been nothing untoward,” Reid said. “But if an investigation makes everyone feel better, do the investigation.”

In other words, ‘we’re telling you up front that nothing will be done, but if you little monkeys want a shiny banana, we’ll let you have it.’

These guys are part of an old boy network that has been engaged in this monkey business for decades. They will never change . Lip service is the best you can expect from them, even in the face of the greatest of controversies. At the end of the day, they will still be golf buddies and still content on treating boxing like a $50 Ukraine hooker at a Russian mob party. They’ll only be moved to action if they are aggressively shamed into doing so. But the mainstream media doesn’t know or care about boxing and the boxing media is full of  nitwits and shills…so, good luck with that.

It’s pointless to debate whether the judges and officials are crooked or just inept, although there’s plenty of evidence to indicate the former is more likely than the latter. The thing is that as long as the same guys are at the top of the decision-making food chain, nothing will ever change.

Donaire has offered himself up for year-round PEDs testing from the Voluntary Anti-Doping Association (VADA). And while this certainly makes for a feelgood Twitter moment (#boxingreform #hooray), there is one key issue that should be raising some red flags.

Victor Conte, who works with Donaire, is also an adviser to VADA. So, essentially, we have a former drug cheat advising an anti-doping agency and then having his own guy work the same protocol that he helped devise and/or refine.

Maybe Conte is, indeed, a changed man with only true and noble motives, but even under the best of circumstances, this certainly seems like a conflict of interest. If Conte is not on the level, the con being perpetrated is BALCO-sized.

Again, I don’t know what’s really in the heart of  the man and I’m not sure to what degree Conte is involved with the development of the testing protocol, but this doesn’t seem like a healthy arrangement if honesty and transparency are really the goals of VADA.

Of course, Donaire could go to the United States Anti-Doping Agency (USADA) for his volunteer testing. But, oh yeah, Conte only wants his guys dealing with VADA.

We don’t need more judges at ringside. We don’t need judges watching via closed circuit TV. It doesn’t matter if there are three, five, fifty, or a hundred judges. As long as the promoters foot the bill for the officials and as long as the sanctioning bodies are allowed to choose two-thirds of the judges (from a list of “acceptable” officials approved by the promoter), there will always be rotten, filthy decisions. It’s a system designed to be fatally flawed and conveniently corruptible. I wonder why more people don’t get that? The fix is built into the system.

Only 1,200 people paid to see the June 2nd 4-Warned Showtime card, headlined by Antonio Tarver vs. Lateef Kayode, at The Home Depot Center. This should serve as a lesson to fans who gripe about poor cards and lousy matchmaking.

4-Warned was a well-made card with four main events and two quality undercard bouts. No major stars were on the bill, but the scheduled bouts promised to be competitive.

Still, people stayed away in droves and, likely, the television ratings also flat-lined.

So, the next time some fan bemoans the lack of quality undercards on boxing shows or complains about promoters not putting together a night full of competitive bouts, just remember 4-warned.

Boxing has always been a sport driven by star power. It doesn’t take a genius to see that one big star on a card is better for business than an entire bout sheet full of quality contests. Promoters learned long ago that the fans don’t really want quality boxing, they just want to see guys they love (or hate) show up for a spectacle.

A lot of boxing’s problems can be blamed on the sport’s power brokers, but not this one. This one is all on us.

Whenever some genius blogger wants to belittle a fighter or network, they brush the Cheeto crumbs from their keyboard and go for the supporting numbers to prove so-and-so is not really a star and is, therefore, undeserving of accolades, money, and media attention.

Sometimes Andre Berto gets it. Sometimes it’s  Devon Alexander or Andre Ward. Lately, Sergio Martinez has found himself in the cross-hairs. The targets seem to be whoever runs afoul of media shills who take favors in return for publicly burying the products of certain promoters.

“Well, Berto only generates 1.2 million viewers on HBO, Martinez only does 1.1 million. How can they be considered stars? Why are they given HBO dates?”

These days, other than Pacquiao or Mayweather, everyone generates about the same numbers. We’re only getting between 1 million and 1.6 million people watching on HBO, no matter who is fighting. The needle goes up slightly when fighters like Miguel Cotto and Julio Cesar Chavez Jr., with niche ethnic/national audiences appear, but that’s to be expected.

It isn’t as if Devon Alexander being on HBO was somehow preventing the next big superstar from getting air time. There are no major American stars. It has something to do with the way the sport has handled itself and with its disappearance from mainstream network TV. But it’s certainly not the fighters’ fault. And to point out one fighter’s tepid TV ratings and drawing power as basis for a hit piece when pretty much everyone is in the same boat is absurdly dumb.

Forget about the controversial win over Manny Pacquiao or his post-fight wheelchair appearance, worthy of WWE Hall of Fame consideration.

How about the fact that, leading up to the bout and now more than a week later, the media has been hush-hush on Bradley’s own tepid drawing power and inability to generate HBO ratings.

Before he was with Top Rank, a Bradley article couldn’t be written without mentioning how little of a draw he was, how insignificant he was to the American fight scene, and how pitiful the Pontiac Silverdome looked when hosting Bradley-Alexander.

You can email Paul at paulmagno@theboxingtribune.com or feel free to stalk him online like many of your favorite writers do .  Paul is a full member of the Burger King Kids’ Club, a born iconoclast, and an ordained minister in the Universal Life Church.