For better or worse, this is as close to an All-American mega-bout as we’re going to get these days. From a curiosity standpoint, alone, fans have to be looking forward to this defense of Ward’s WBC/WBA world super middleweight titles. Both fighters do frustrate, though. Ward looks so good at times, only to disappoint up close with way more “grab and tug” than he needs. Dawson, the WBC light heavyweight champ, is a beautiful technical fighter, but rarely shows anything resembling urgency or passion. Ward is nothing if not ambitious and full of fire, so, unless we somehow see a more inspired Dawson who can cut his opponent up from the outside, expect Ward to be too physical and too driven for his challenger. 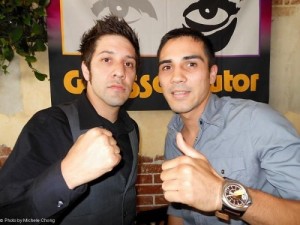 Part of the intrigue in this battle is that defending WBC lightweight champ, DeMarco is so vulnerable. Best known for a losing effort to Edwin Valero and a come from behind stoppage of Jorge Linares to take the belt, DeMarco is obviously tough and determined. He’s also just one notch below elite-class. John Molina is a heavy-handed, hungry challenger who will come forward and quickly turn things into a battle. The brain picks DeMarco to retain in a thriller, but the heart is definitely screaming upset.

Even if Vitali fought with a spit bucket on his head and twenty-pound ankle weights on both legs, he’d still be the heavy favorite in this one. Charr, from Germany by way of Beirut, Lebanon, is exceptionally unspectacular, even among Eastern Bloc fringe contending heavyweights. He plods forward, eats copious amounts of punches (despite a high guard defense), and has an offense mostly consisting of wide arm punches. In other words, the only intrigue in this bout revolves around how long the  future Hall of Fame defending WBC champ, Klitschko, decides to carry him.

The heavyweight Russian southpaw, Abdusalamov, fights with the finesse of a bowling ball rolling down a flight of stairs, but he’s currently one of the sport’s more compelling offensive fighters. It’s hard to tell what he’ll find when he meets McCline. The three-time former world heavyweight title challenger is certainly experienced and he’s bright enough to come up with some sort of game plan. But, more than likely, we’ll see a massive ass-whuppin’ delivered to a 42-year-old fighter who can’t really get out of its way.

Billed as a “world” title bout by one of the lesser known alphabet outfits, obviously this is nothing more than a rebound fight for Rubio, who is one fight removed from a unanimous decision loss to Julio Cesar Chavez Jr. The 41-year-old Argentine, Baldomir brings name recognition and a one-time rock-solid chin to the fight. Rubio exists in the space between top challengers and Grade A second tier fighters and he should be able to beat guys like Baldomir all day, every day. The Mexican’s entertaining style and Baldomir’s chin should allow for a pretty entertaining bout while it lasts.

Adamek is in a strange spot. He’s obviously not good enough or big enough to beat a Klitschko, yet he’s still a respectable Top 10 heavyweight and a draw among Polish and Polish-American fans. So, Adamek will keep fighting and making marginal paydays until the Klitschkos retire or get knocked out of the title picture. Walker is tough and reasonably heavy-handed, but not a world class heavyweight by any stretch of the imagination. All in all, this is a good fight and has the potential to be quite entertaining. On paper, Adamek should win handily. But as an undersized heavyweight with some mileage behind him, he’s extremely vulnerable, especially against someone like Walker, who will be throwing punches until the very end.

Rather than stepping back in line and waiting for another shot at a cruiserweight title, the 36-year-old Cunningham seems headed towards a career cash-out as a heavyweight. Expect two or three gimmes against club-level opposition and then a high six-figure, low seven-figure shot at one of the Klitschkos by the end of 2013. Cunningham is still an elite-level cruiserweight, but may lack the chin and durability to be anything more than a fringe contender at heavyweight. Jason Gavern is just okay in his role as opponent/fall guy, but he lacks the power and fire to expose any of Cunningham’s weaknesses at the higher weight. This is the first leg of Cunningham’s farewell tour and it will likely end with Gavern looking up at the ring lights.

The publicity about Jennings revolved around him being the young heavyweight willing to take on all comers and challenge himself with top shelf competition. Well, that storyline lasted precisely two fights as Jennings is now back to battling the usual suspects. Koval is pure roadkill, losing seven of his last nine, and often losing to less-than-stellar second tier fighters. He also gets stopped a lot. Team Jennings may be looking to beef up their YouTube highlight reel with an awe-inspiring KO and Koval will likely oblige.

Matthysse has paid his dues, suffering through two screw jobs (Zab Judah, Devon Alexander) and beating Humberto Soto and DeMarcus Corley. Olusegun, frankly, has not paid his dues, feasting on marginal UK competition and then earning this shot at the vacant interim WBC junior welterweight champ by beating equally untested Ali Chebah. Still, the Nigerian, Olusegun has the energy and drive to upset. He also throws wide, winging punches that scream to be countered. If his relatively untested chin is not up to snuff, Matthysse will break him down and take him out. If his chin holds up, this is a pick ’em.

Liverpool’s Bellew is what he appears to be– a crude regional-level champ who looks like he could develop into something greater. At 29, though, it’ll be tough developing to his full potential before he crashes face first into his own age limitations and/or the fist of someone too good for him. Meanwhile, on the other side of the ring, let’s not buy into any pre-fight hype– Edison Miranda is simply no longer a world class fighter (if he ever was one in the first place). Still heavy handed and arrogantly confident, Miranda is good enough to beat most pugs, though, and he carries with him a resume stacked with names Bellew can only dream of.  Sure, Miranda has lost to the likes of Andre Ward, Arthur Abraham, Lucian Bute, and Kelly Pavlik, but a loss against those guys trumps Bellew’s wins over Danny McIntosh or Ovill McKenzie as well as a decision loss to Nathan Cleverly. The question with Bellew-Miranda is whether Miranda, at light heavyweight and after several high-profile losses, is still good enough to beat a guy who wouldn’t have been in his league four years ago. Miranda is being brought in to lose, but he stands more than a fair chance of flipping that script.