If you write about boxing for a living– or a semi-living– you’re going to be guilty of barking up wrong trees and/or occasionally looking like a straight-up idiot. It’s part of the business when you actually care to go out on limbs and speak your mind. 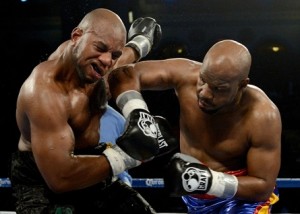 Awhile back I predicted that Shane Mosley would shock the world and knock Manny Pacquiao out. After Mosley’s pat-a-cake performance and one-sided loss, I was left to fend off the angry cyber-taunts from Pacland and one uber obsessed, fake mean blogger who hurled insults at me via Twitter from his mother’s kitchen table. It’s all part of the game for those who have made speaking their mind into an occupation.

But what if that person speaking his mind about a product is also getting a paycheck from a company with a huge interest in promoting that same product?

That’s the situation at both HBO and Showtime, who sign fighters to exclusive deals, spend tons of money to promote them, and work tirelessly to showcase them in the right fights on the right cards. Then, on fight night, we’re supposed to assume that their hand-picked broadcast team is an actual set of hard-hitting journalists and analysts.

The crews do their work, though. They do the proper pre-fight interviews and are certainly professional enough in their broadcast duties. But every now and then we’re reminded that they’re not an independent entity, but merely part of the same corporate family as the fighters they cover.

Living in Mexico, I don’t always get a chance to see the HBO or Showtime telecasts, but when I do, there’s always plenty to remind me that, more often than not, we’re being sold a product.

Jim Lampley’s “Bang Bang” Pacquiao worship comes immediately to mind. Max Kellerman’s insistence earlier this year that Nonito Donaire has been facing the biggest and best in his division was another example.

Recently, we were sold on Seth Mitchell being the next big thing and a possible savior for the dismal American heavyweight scene. And we were pitched that bill of goods based on….well…nothing.

Mitchell was an interesting figure and sure seemed to look the part of what a “Great American Hope” would look like if one did come along. Big, athletic, heavy-handed, with a NCAA football pedigree– Mitchell seemed to be pulled to this planet via direct link to the subconscious of the typical American fight fan.

HBO was heavy-hyping the guy before we even knew what he was about. And all it took was for Mitchell to beat Timur Ibragimov– a fighter so pedestrian that he wouldn’t even take the top spot in an all-time great Ibragimov list– before the premium cable channel became fully invested in the Seth Mitchell business.

In his post-Ibragimov performance gainst Chazz Witherspoon, Mitchell would find himself wobbled by the journeyman and nearly put away in the first round. However, as most journeymen are prone to do, Witherspoon snatched defeat from the jaws of victory and allowed Mitchell to regroup and take the fight in the third.

The talking points from the Witherspoon fight were that Mitchell pulled through like a champion, was able to think on his feet, and eventually put away a solid opponent.

Reasonable enough talking points, considering that Mitchell was such an unknown entity in terms of fights not involving Footlocker assistant managers and fist-flinging hobos. For those of us with the “glass half full” mentality, it all seemed fairly reasonable.

We all wanted to believe that Mitchell was our chance to get a foothold back in the heavyweight division. As a concept, Seth Mitchell, certainly was worth the benefit of the doubt and a suspension of disbelief. In reality, though, we were taken in by marketing.

Mitchell was put away in two rounds last Saturday night by Johnathon Banks– another dubiously qualified American heavyweight with a ridiculously fat-padded record. Banks is Seth Mitchell, except sans “the look” and the NCAA street cred that generated some attention from the boxing-ignorant mainstream sports media.

But don’t expect Banks to get any sort of substantial push from the win. Boxing, although allegedly structured to be a sport where the better man wins and moves on to better things, is really only designed to sell the product that brings the biggest immediate pay-off.

As such, expect the HBO and Showtime announce crews to keep hyping their own product. They may say otherwise and swear that their analysis is 100% on the level, but how many times have cash cows been bashed by the network’s own announce team? How many times have serious criticisms and/or concerns about their main stage fighters ever found their way to the air waves?

I guess this is part of the game and should be expected. After all, plenty of boxing writers ascribe to the same pay for play mentality, although they do it below the table and away from prying eyes. The casual fan just has to be aware that what’s being said (or written) has a money-push behind it. A product is always being sold.

You can email Paul at paulmagno@theboxingtribune.com or simply pine away out of petty jealousy like some fake mean bloggers.  Paul is a full member of the Burger King Kids’ Club, a born iconoclast, and an ordained minister in the Universal Life Church.