How impressed am I supposed to be that Nonito “The Filipino Flash” Donaire knocked out old spindly-legged Jorge Arce in three lop-sided rounds? In the year-end awards should I create new categories to somehow express the absolute awe I have for the WBO super bantamweight champion? The ‘Success in beating up hapless pugs Vic Darchinyan crushed four 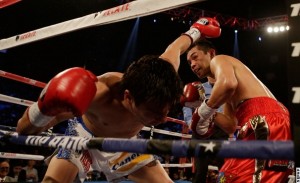 years ago’ award sounds about right. How about the ‘Victory over the tallest and most obscure South African fighter’ award? Of course there always is the ‘Least shredded fighter to work with a former P.E.D. dealer’ award. That one was low– everyone’s’ bodies are different.

And to whoever said that Nonito’s win somehow is revenge for or adjudicates last week’s crushing upset loss Manny Pacquiao suffered at the right hand of Juan Manuel Marquez (as in Filipinos versus Mexicans) needs to seriously lay off the A-side meth.

I feel Donaire has a lot of talent and he wastes it waiting for one perfect punch a fight, even in the face of absolutely no danger whatsoever. Perhaps that’s his style, or maybe he has serious stamina issues; I know he has some oxygen mask regimen  as part of his training – but who knows? Nonito Donaire at age 30, still has so much potential but the perception is that he is taking the lowest risk/lowest reward type of fights (maybe not monetarily but certainly experience and challenge-wise).

Is it just me or does it seem like – aside from the scrap with the gangly Jeffrey Mathebula – Nonito usually looks noticeably bigger than pretty much everyone he faces? And I don’t mean muscle-wise. Donaire, while he is obviously in shape, doesn’t really have the musculature or definition you would expect from someone on his level. Maybe he should ditch the V.A.D.A. pitchman and see what Angel Heredia is up to now a days?

In other performance enhancing drug news, both Manny Pacquiao and Juan Manuel Marquez passed their post- fight urine tests (their utterly pointless, hopelessly outdated and easily by-passable urine tests – Juan Manuel declined to comment when asked whether he had sampled any of the samples…). The screenings were administered by the NSAC (Nevada State Athletic Commission) and they tested for marijuana, 80s anabolic steroids (think Arnold) and diuretics. Good thing that they weren’t smoking too much weed during training [insert Julio Caesar Chavez Jr. joke here].

Amir Khan looked in decent form in his comeback fight against the hopelessly outclassed lightweight Carlos Molina. Though there was still a sense that Amir was one hard counter hook away from being knocked into samba dance mode again, his speed and combination punching are still top notch. Danny Garcia still beats him if they rematch.

Donaire’s win marks the second knockout in the last second of a round two weeks in a row…Another one that immediately comes to mind is Mayweather’s excellent two-piece and a biscuit he served to a fouling Vicious Victor Ortiz last year. Shane Mosley also had a memorable final-second KO over Ricardo Mayorga in 2008 that made the venerable Larry Merchant exclaim “Shane Mosley, I love you!”.

Now that Larry Merchant is off the HBO broadcast team I think I may just actually miss the old bastard. In one of his finer ‘Larryisims’, Merchant was cut off as he was rambling and stumbling over his own words during the Juan Manuel Marquez vs.Manny Pacquiao fight last Saturday saying something to the effect of “And once again the drama king has created more drama where as the blood of drama and blood out and … err, uh Marquez”. Maybe he was trying to cast a wizard spell or something. Anyway, times like that is when the vodka-soaked kooks’ absence will be felt the most.

I contend that Paulie Malignaggi is already one of the most well spoken, collected and knowledgeable ringside commentator in the game today. The Magic Man is very unbiased and honest; his unique insight is always interesting to me.

This week I will leave you with the immortal words of the legendary Bruce Lee, “I do not write the Sunday Brunch, it writes all by itself”.