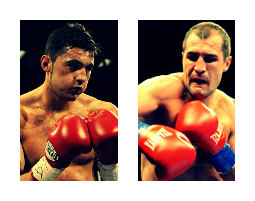 On Saturday, August 17th, WBO light heavyweight champion Nathan Cleverly will make the fifth defense of his title when he challenges fellow undefeated Sergey Kovalev in a scheduled twelve-round bout at the Motorpoint Arena in Cardiff, Wales, United Kingdom. The bout will be part of an HBO split triple-header which will be headlined by Daniel Geale Vs. Darren Barker, and Jonathan Romero Vs. Joseph Agbeko.

The Wales native, Cleverly(26-0, 12 KO’s), 26, is coming off a twelve round unanimous decision victory over Robin Krasniqi on April 20th. Cleverly is riding a four fight win streak since his TKO 4 victory over Aleksy Kuziemski in 2011, to capture the WBO light heavyweight title.

Kovalev(21-0-1, 19 KO’s), 30, a native of Russia, will meanwhile be fighting for his first world title. Kovalev became the mandatory to fight Bernard Hopkins, but the fight against Cleverly was all but a done deal, prior to Kovalev’s last fight in which he stopped Cornelius White via third round TKO earlier this month.