Many scenarios could’ve played out in this defense of Bradley’s WBO welterweight title and one of the most likely ones did happen as the 30-year-old Bradley’s natural edge in athleticism trumped Marquez’s superior technique and experience.

Fighting mostly from the outside and only venturing in during occasional bursts of speedy scoring salvos, Bradley was effective in doing enough to keep Marquez uncomfortable and unable to counter.

As the fight went on, Marquez began to find the mark and even up the score, while Bradley worked to stay outside and land his own counters.

At the end of twelve, though, Bradley got his reward for being Bradley– awkward, athletic, and tough with shockingly little boxing refinement for a main stage player. Marquez would be left with another tough loss on his ledger and another post-fight interview in the locker room after storming from the ring in a huff. For the record, The Boxing Tribune scored the bout a 114-114 draw.

Cruz, who was fighting to become boxing’s first openly gay world champ, was tough and solid, but clearly competing at an all-around level well below Salido.

Mexico’s “Siri”  battered the Puerto Rican, Cruz for the first three rounds, effectively cutting off the ring and using his superior skills to ravage Cruz both upstairs and downstairs.

In the fifth, Cruz began using more effective movement, evening up the contest for the next two rounds before Salido pushed forward and began to once again launch solid, precise shots to Cruz’s head and body. 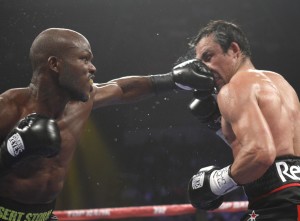 In the seventh, with Cruz backed up against the ropes, a vicious hook-uppercut combination from Salido ended the bout as a stunned Cruz crumpled to the canvas, unable to answer the count

— Mega, ultra, super well-regarded two-time Olympic gold medalist from the Ukraine, Vasyl Lomachenko (1-0, 1 KO) outclassed tough Mexican, Jose Ramirez (25-4, 15 KOs), scoring a knockdown with a body shot in the first round and then ending the fight in the fourth with another sharp shot to the body.

— In the pay-per-view opener, Sean Monaghan (19-0, 12 KOs) out-slugged and stopped an overmatched Anthony Smith (14-2, 10 KOs) in the third round of a scheduled ten round light heavyweight bout.