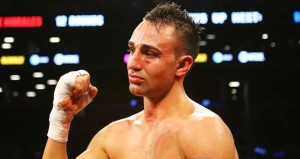 Using little more than a chicken-peck jab and some solid feinting, Malignaggi outworked Judah, who seemed to become deeply disinterested in the so-called Battle of Brooklyn by the third round.

Hardly scintillating, entertaining, or even appealing to fans of technical boxing, the 33-year-old Malignaggi did what he it took to win and, given the 36-year-old Judah’s lack of fire, it didn’t take all that much.

A questionable knockdown call against Malignaggi early in the fight meant nothing more than a lost point in a relatively one-sided romp. The new “King of Brooklyn” now moves on to bigger and better things and, perhaps, has punched his ticket to enter the Mayweather sweepstakes for a shot at the big prize next May 3.

Porter, a long shot to beat the more experienced Alexander, began the fight by rattling the defending champ several times in the first four rounds, sweeping the first third of the bout.

Unfortunately for the viewing public, the fight settled into a monotonous pace with neither fighter showing much. Alexander, however, was able to close the gap and make things close enough to create the impression that Porter could be denied the victory.

But, coming as a pleasant surprise, the judges got things right and awarded the bout and the belt to Porter.

Lara fought impressively when compared to an absolutely ineffective Trout, who threw nothing of note and did little to change the dull pace of the bout. Lara did what he needed to win, often taking rounds with just one meaningful punch.

The only fireworks in the bout came in the eleventh round when Lara landed the first truly powerful punch of the match and dropped Trout. The Cuban pressed the attack for the rest of the round, but Trout was able to survive and find his way to an uneventful twelfth round and a well-deserved unanimous decision loss.

A close fight throughout, the judging was all over the place with one judge scoring the fight 114-112 in favor of Bika, another scoring it as a decisive 116-110 win for Dirrell. and the third judge turning in a 113-113 score.

The bout pitted Bika’s crude clubbing against Dirrell’s smoother, movement-oriented style. The matching of styles made for plenty of awkward moments and a tough time in declaring a decisive winner.

The Boxing Tribune, taking a one-point deduction against Bika for a low blow and a Dirrell knockdown into consideration, scored the bout 114-112 in favor of challenger, Anthony Dirrell