On 31 May Wembley Stadium will play host to what will be the biggest British boxing match for years, when the much anticipated Carl Froch and George Groves rematch takes place for the WBA and IBF super-middleweight titles. 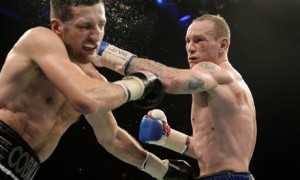 It was Froch who went away victorious last time the two fighters met at the Manchester Arena in November 2013, and the bad blood between these men is building nicely in the lead up to the fight. George Groves really ramped up the hype before last year’s fight, perhaps hoping to send 36 year old Froch into retirement, though obviously unsuccessfully. This time around Groves is not showing any less aggression in the preamble to the big night, pushing and shoving his opponent at the recent Wembley press conference. This time Groves wants to put an end to Froch’s career once and for all, and to make amends for last year’s fight and its somewhat unsatisfying conclusion.

In the last match, Froch won by a controversial stoppage in the ninth round, when the referee jumped in to stop the fight after Groves had to cover up from a barrage of blows. The general opinion is that the referee was too quick to stop the fight, especially as Groves was ahead on the scorecards and had knocked down the champion in the first round. Groves went to both organisations seeking a rematch and his request was granted. From then, the search was on for a suitable venue for the fight and the new Wembley Stadium fitted the bill perfectly. Within an hour of tickets going on sale, 60,000 had been snapped up, making this the most lucrative fight ever in the UK.

This is the first fight to have captured the public’s imagination so powerfully since the Chris Eubank – Nigel Benn fights of the nineties. This fight is also going to be shown by HBO in the United States (it didn’t show the November match).This will give the US a chance to see just how good these two combatants are. We are expecting them to go toe-to-toe, and hoping that the fight has a more conclusive and less anticlimactic end than the last one.

Carl Froch has always had a reputation of being a brave fighter who is willing to stand and trade with opponents, but fans in the States have not seen the best of him with the last of his three fights in the States being a points loss to Andre Ward, and losing both his WBA and WBC super-middleweight titles. ‘The Cobra’, as he is also known, has a very impressive overall record of 32-2, 23 wins coming by knockout, but is nearing the tail end of his career.

George Groves’ career on the other hand is set to sky-rocket; still only 25 and with a 19-1 record, it is only a matter of time until he holds a world title belt, and there is a very decent chance that could happen in May. He has beaten a host of quality fighters in his career so far including James DeGale and Glen Johnson. He has already fought in the US twice, winning by TKO both times. And with enough exposure from the Froch fight, he could be set to make a real impact across the Atlantic. But he has to beat Froch first, and that is certainly no forgone conclusion.

Sam Butterworth is a writer and boxing fan who loves a good fight (observing rather than competing). He writes for various sites and publications, and works for Martial Art Shop.