“Remember this, your first few fights will be decided on conditioning and your will to fight. Neither of you have developed enough skill to where it has a major bearing on the fight.”—Jackson: see: http://en.allexperts.com/q/Boxing-1533/2009/2/Preparing-Gold-Gloves.htm

“I used to street fight when I was younger. And then when I started boxing, I kind of gave up on that. It didn’t seem to have any point to it, where with this, there’s always a point.” — Malachy Farrell, Golden Gloves boxer. 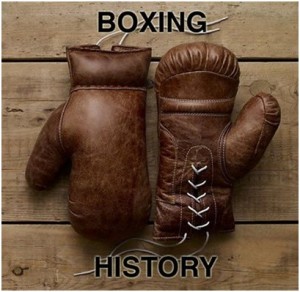 “The most humble person could be a boxer… You get a guy off the street that thinks he’s a real badass and he comes in here, he’s nobody. He’s just another person, .It’s a skill. It’s what you learn. It’s the sacrifices, the training. You don’t have to be the smartest person, [but] you can be a lawyer and be a boxer. We have a doctor that boxes, we have a school teacher that’s in the Golden Gloves. He’s in the finals.” —Sam Colonna-Windy City Gym head trainer.

Chicago Tribune fabled Sports Editor Arch Ward came up with the idea of a city-wide amateur boxing tournament in 1923, to be sponsored by the Tribune. Each champion was awarded a miniature golden glove which gave the tournament its name. New York City has been a boxing hot bed as well and for 85 years, the Daily News Golden Gloves has brought the finest amateur boxers to all five boroughs. Prior to the start of the 1977 Golden Gloves and 13 years after dropping the tournament for a number of reasons, the Chicago Tribune announced it would once again sponsor the Golden Gloves in Chicago. The Inter-city matches between Chicago and New York returned, but were finally put to rest for good in 1982 after interest waned.

All Gloves tournaments are planned, promoted and directed by the Golden Gloves Charities and within the limits of the amateur code, and in keeping with Golden Gloves’ high purposes and ideals (i.e., its mission). All profits go towards further development of amateur boxing which encourages a positive lifestyle for today’s youth.

The Golden Gloves are open to all non-professional pugilists age 16 and over who are United States citizens. There is also a Silver Gloves amateur tournament, which is for amateurs’ age 10 to 15 years old. However, amateur boxing can involve any amateur fight at a local boxing gym or union hall and/or fights sanctioned, for example, by the CYO, PAL, Park Leagues, etc, and there are several different tournaments that take place to determine amateur champions. But it bears repeating the major amateur sanctioning bodies in the United States are the Golden Gloves Association of America and USA Boxing, the latter of which sanctions a national tournament to determine who will compete on the United States National boxing team at the Olympic Games. See: https://webpoint.usaboxing.org/

The Golden Gloves involve two boxing divisions: novice and open. A boxer is considered an open fighter when he’s had 10 or more amateur fights, if he’s entered and fought in three Golden Gloves tournaments, or if he’s advanced to the finals as a novice.

One is technically considered a “novice” until the 11th bout. Then he/she automatically becomes “open.” If he is entering in an advancing tournament (Golden Gloves, U.S. Championships, PAL), he can participate in the Open division with a minimum of 5 scored bouts in his passbook and, most importantly, if his trainer is confident he can compete against boxers with more experience.

Novice fighters who win the “Golden Gloves” can no longer be Novice and have to move to the Open Division. An Open Division fighter who wins “The Gloves” will go onto the Nationals and if he/she wins the Nationals, he gets a coveted berth at the Olympic Trials and/or a shot at fighting for Team USA.

Being a Golden Glove fighter

When someone brags that he fought in the Golden Gloves, you might want to tactfully push back for an explanation keeping in mind that anyone can fight in the Junior Golden Gloves as long as he is at least 16 years old– and I do mean anyone. Thus, one fight—and maybe a losing one at that—gives one the “sacred” right to say he/she is a former Golden Glover, though I do respect anyone who gets into a ring. I know of some “former Golden Glove fighters” who would faint at the sight of blood. And I know of just as many Park League fighters who were extremely skilled but never fought in the Gloves.

Back in 1950’s, I also knew of some NCAA fighters who were outstanding amateurs as well and were as skilled as many professionals. Sadly however, the Michigan Sate Spartans boxing program was terminated in 1958 amidst criticism of the sport and its role as intercollegiate athletic activity. The other Big Ten universities also terminated their boxing teams after the Charles Mohr tragedy in 1960. See: http://www.boxing.com/spartans_and_badgers.html

Many former Golden Gloves champions have gone on to become world champions in the professional ranks. Indeed, many have been inducted into the International Boxing Hall of Fame. For more detailed information about this and other facts, see: http://www.goldengloves.com/welcome/

Conversely, many former amateurs who did not fight in the Golden Gloves national tournament also went on to become world champions, achieving their amateur fame elsewhere. Professional contender Alex Ramos won four New York Golden Gloves and several other amateur titles. These included the Empire State Games, the PAL Tournament and the National AAU Championships. Mark Breeland won the New York Golden Gloves Championship an astounding five times (1980–84), His amateur record was an eye-popping 110-1. He also won a Gold Medal at the 1984 Summer Olympics in Los Angeles. One of the most decorated amateur boxers in US history was Michael Bentt who won just about every amateur tournament out there. Current champion Andre Ward won multiple National Amateur championships as well

Some former GG champions who resonated with me for any number of different (and somewhat complex) reasons include:

Future Hall of Famer Jones (58-8) is still fighting, while Jacobs (27-1) and Solomon (22-0) are currently positioning themselves for major bouts. Shawn Porter is currently a world champion, but many like Donald Cobbs (25-18-1), James Busceme (30-6), and Lamar Murphy (29-11-1) discovered that Golden Gloves success did not transfer automatically to the professional ranks. In fact Cobbs and Chicagoan Lee Roy Murphy (30-4) were among the best amateur fighters I have ever seen.

First, there is the Silver Gloves category if a young fighter so chooses.

Second, the Novice Class is available to anyone who either wants to start there or move from the Silver Gloves or from some other program like Kid Gloves and/or the PAL Junior Olympic program.

Third, the Open Class is available depending on certain conditions.
Ordinarily, a fighter who wants to fight professionally will do so after Open Class experience but that’s clearly not axiomatic. Some might want to dispense with the Golden Gloves experience altogether before they turn professional.

Says Ed Graney of the Las Vegas Review-Journal: “Arch Ward had a simple idea. Help kids and promote amateur boxing. Take fighting off the streets and into a ring. Turn dreams into reality. The same notion exists today, much as it did in Chicago in 1923. The same hope lies within those who continue to champion Golden Gloves boxing.”