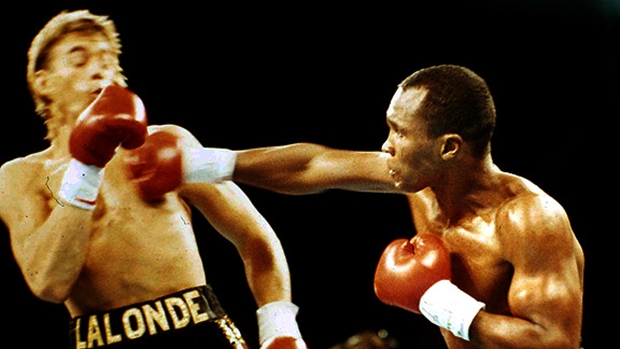 Donnie LaLonde was doing a number on Sugar Ray Leonard at Caesars Palace in Las Vegas on Novemebr7, 1988, and I was shocked. BAM! He put Leonard down in the first with an overhand semi-cuffing right and, stealing a page out of Leonard’s book, lifted his hands to salute the stunned crowd. Sugar Ray was visibly shaken and went on the defensive as LaLonde pressed the attack. Leonard looked dejected and concerned as he headed for his corner at the bell.

Engaging in furious exchanges during the next several rounds, the fight appeared close, though LaLonde had tallied that big knockdown in the first round. Finally, toward the end of the seventh, Leonard started backing up Donnie with sharp counters and the tide turned, albeit imperceptibly. In the eighth, LaLonde landed some bruising lead rights and used his long jab effectively to keep Ray off him.

Finally, the Canadian Golden Boy uncorked a barrage of shots in the ninth and went for the kill, but LaLonde is no closer. Leonard slowed him down with a crunching punch to the rib cage the power of which was generated by his unbelievable hand speed. He then mounted his own attack.

After a vicious assault, LaLonde hit the canvas and Leonard, as is his wont, lifted his hands high. Unwisely, referee Richard Steele let the fight continue and it was now time for Sugar Ray to close matters.

Quickly backing the defenseless Canadian into a corner, Leonard numbed him with two savage rights and finished him with a withering left hook that landed on LaLonde’s throat. Donnie went down and stayed down for several minutes; it was not a pretty sight.

When Sugar Ray Leonard saw a weakness or detected that his opponent was hurt, he was on the case faster than you can say “done and done.” His starchings of LaLonde, Andy “The Hawk” Price (who a few years earlier had beaten Pipino Cuevas), Dave Boy Green, and Bruce Finch were a testimony to ring brutality.

Leonard belied his baby face. He was one of the most ruthless closers in boxing history. Yes, he was a great ring technician, but when he wanted to, he could crunch.

Once he had his man hurt, he gave different meaning to the word “closure.”