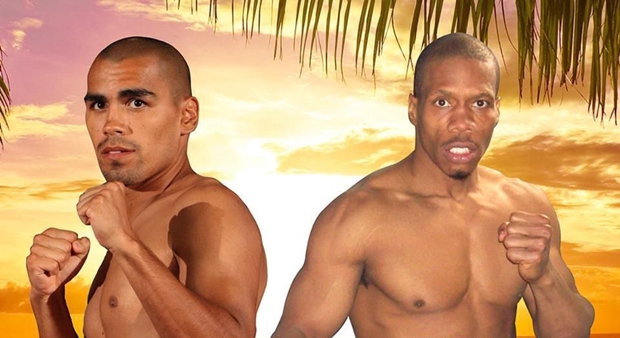 An apology in advance to our brothers and sisters in Mexico, who are about to get the worst American export since Pop Tarts and syndicated Honey Boo-Boo reruns via Televisa.

Carlos Molina vs. Cornelius “K9” Bundrage on Saturday night pits two of the sport’s most flagrant and shameless clinching maulers in the game against one another in a bout that will have fans at the Oasis Hotel Complex in Cancun grabbing their snorkels and racing for the ocean.

Molina is making the first defense of the IBF junior middleweight title he won from Ishe Smith in a desperately awful snoozer on the Mayweather-Canelo Undercard last September. The native of Patzcuaro, Michoacán, Mexico had been residing in Chicago, but has been forced to resume his career in Mexico due to issues stemming from a sex with a minor conviction in 2002 that, through a series of events, led to his deportation.

A perpetual underdog, Molina is a likable sort– except for the sex with a minor stuff– and had been made to jump through hoops before finally getting a shot at a world title. Upset victories over Kermit Cintron, Danny Perez, and a should’ve-been upset over James Kirkland that was totally botched by the inept (corrupt?) Texas commission are the high water marks of his career, along with wins over Ishe Smith, Cory Spinks, and a disputed draw with Erislandy Lara. Molina is also no stranger to the screwjob, as his clear-as-day 2005 victory over Julio Cesar Chavez Jr. was declared a draw, causing a near riot at the Arena Monterrey in Monterrey, Mexico.

But as likable as Molina is– again, sans sex offender stuff– he can also be one of the most tedious high-end performers in the game.

A spoiler by nature and necessity, Molina’s response to consistently having to deal with athletically superior opponents is to drag them into a mauling, grappling, clinching muck. And he has been very successful in ruining everyone’s evening to his benefit.

The 41-year-old Bundrage, on the other hand, looks like a beast who could bench-press a Buick. Looks are deceiving, though, as the former Contender reality show contestant has shown himself to be so lacking in skill and finesse that his immense physical strength actually works against him, making anything other than a from-the-waist haymaker into a clumsy, often self-stifled arm punch.

A former IBF junior middleweight titlist, Bundrage’s resume and star power has been diminished by being caught in the Cory Spinks-Sechew Powell-Ishe Smith Bermuda Triangle of extreme dullness since 2010. He would eventually lose the belt he won from Spinks to Smith in a 2013 stinker best remembered for Floyd Mayweather’s alleged gyrating crotch harassment of Bundrage’s wife at ringside.

Bundrage has had just one bout since losing to Smith in February of 2013– a January, 2014 twelve round unanimous decision over Florida club fighter, Joey “Twinkle Fingers” Hernandez in an inexplicably designated IBF junior middleweight title eliminator.

And that leads us to Saturday night on ESPN Deportes and ESPN3.com.

Expect Molina, unable to deal with the physicality of Bundrage, to work his way inside and stay there by hook and by crook. Molina will hook Bundrage’s elbows, tangle up his forearms, step on his toes, and purple-nurple him if possible. Heads will come together in this one, so don’t be surprised if things get bloody at some point.

And Bundrage, with no answer for the mugging other than to fling Molina into the fifth row, will answer back by grappling harder.

The action may be so tight and up close that it shouldn’t be a surprise if, at one point, Molina and Bundrage emerge from an air-tight clinch wearing each other’s trunks.

For the optimists, there’s also an ever-so-slight possibility that a ring-eager Molina, training in the hardcore gyms of Mexico for the last several months and desperate to impress in what could be his last American TV appearance, could come out with pure offense on his mind and try to test an aged and slow Bundrage. If that happens, viewers have a chance at an entertaining Saturday evening.

Most likely, though, Molina will be Molina and Bundrage will be Bundrage and fans will be glassy-eyed and numb by round seven. Molina probably takes this via tortuously-dull and frustrating  unanimous decision, likely in the area of 116-112 or 115-113.