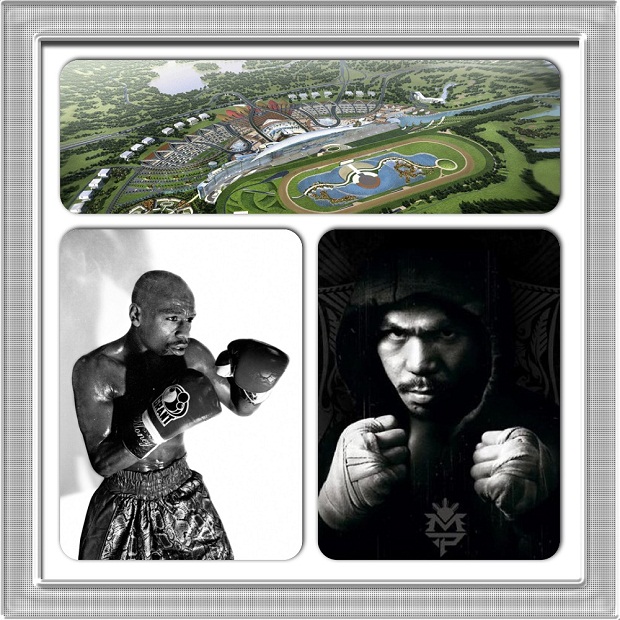 With the common folk in an uproar about the possibility of Floyd Mayweather and Manny Pacquiao finally facing off at some point, they’re fixated on the wrong possible hold ups.

The biggest obstacles will obviously be the two promoters coming together and the money. HBO and Showtime can co-exist, they have before for a mega-fight.

But has one any thought about the possibility of location being the biggest hold up? It’s been basically 10 years since Mayweather fought outside of Vegas. Pacquiao, because of alleged tax issues, has chosen to finish his career outside of the United States (or at least half-inside, half-outside the US).

So… How could we possibly avert this likely obstacle? I took it upon myself to find the 10 best locations to host the mega-bout:

10. Azteca Stadium, Mexico City, Mexico. Just imagine 125,000 people lining up to enter the venue. The biggest question though– who would the Mexican fans cheer for? Would they band together and root against the American, Mayweather? Or would they prefer Mayweather to best Pacquiao because of his history with their countryman, Juan Manuel Marquez? Who knows

Azteca stadium has some historic reference. It hosted “The Hand of God” goal from Diego Maradona in 1986. It also hosted “The Game of the Century” in 1970 featuring Italy against West Germany.

Julio Cesar Chavez packed 132,000 people into the stadium for his bout against Greg Haugen in 1993.

Would Kevin Hart show up?

9. The Bercy, Paris, France. Nothing’s says wealth and fashion quite like Paris, something Floyd is accustomed to. I actually think he vacationed here recently.

The Bercy is a beautifully built structure, designed by architectural firm Andrault-Parat, Prouve and Guvan.

Unfortunately, it would only sit 17-18 thousand. Far too low for a bout of this magnitude. Kim and Kayne would probably be in attendance.

Grand Stade isn’t set to open until 2015 and will serve primarily as a soccer stadium.

Constructed by Space Group Co., it will hold up to 80,000 spectators

This massive, beautifully constructed stadium was built for the 2010 World Cup. The final cost was roughly 600 million US dollars. It was designed by GMP, Louis Karol and Point Architects.

It seats 55,000 for a soccer game, it could possibly fit 60,000 plus for a boxing match. A selling point– it’s surrounded by the Atlantic Ocean. It’s a beautiful sight at night.

Recent concerts have included U2, Justin Bieber and Eminem. Floyd and Manny are just as iconic.

Built by Popolus Architect for the 2000 Summer Olympics, it cost a whopping 690 million.

Sydney alone, with it’s gorgeous weather and scenery, would make a favorable location

The regular attendance capacity is still 74,738. You can probably add 5-10 more thousand for a boxing match.

It was a host stadium for the 2014 World Cup. It will also host the opening and closing ceremonies for the 2016 Summer Olympics

“The Big O” has a 770 million dollar price tag. Over a billion dollars after reconstruction over the years.

It has “mega fight” experience as it hosted the 1980 bout between Ray Leonard and Roberto Duran.

The Manchester Arena doesn’t hold the capacity, 21,000, I believe a bout of this magnitude should warrant. However, it’s been used as a boxing event before and the event were stellar.

It was originally built for Olympic competitions, but was used for the 2002 Commonwealth Games.

The arena is rated one of the busiest arenas as far as ticket sales for events, hosting the likes of Madonna and Beyoncé.

Boxers such as Tyson, Khan, Hatton, Calzaghe and Haye have performed at this venue as well. The UFC has also used the M.E.N Arena for UFC 70, 105 and UFC Fight Night.

Both venues have hosted boxing, being the home for Heavyweight Champion, Wladimir Klitschko.

The O2 Arena is smaller, with a capacity of only 17,000. However, it’s hosted big events such as a Metallica concert, the 2009 MTV Awards and the Buffalo Sabers vs Los Angeles Kings. It’s also the venue for Klitschko vs Pulev.

On the other hand, Esprit is huge, with a potential capacity of 66,000. It’s hosted Madonna, Bruce Springsteen and Bon Jovi. Klitschko has used this venue on two occasions.

The number 1 site for a potential Mayweather-Pacquioa.

Dubai is booming, it’s the fastest growing city in the world. They have advanced technology and futuristic architecture design. Also, they have showed interest in hosting this proposed bout. There are financial investors beyond the promoters lining up to promote this event

On to the venue. The race track holds 60,000 seats, however, there’s no actual number for a setup like boxing. There’s a possibility you could add 5-10 thousand more seats. There is a hotel and 9-hole golf course on the property as well. It’s beautiful, to say the least.

The selling point. Mayweather-Pacquiao would be the first significant event held at the venue. I believe that adds to the excitement of this historical event.

So there you have it folks, the 10 best locations to host May-Pac outside of Vegas and China. And if you don’t believe this will be an issue, just watch and see.