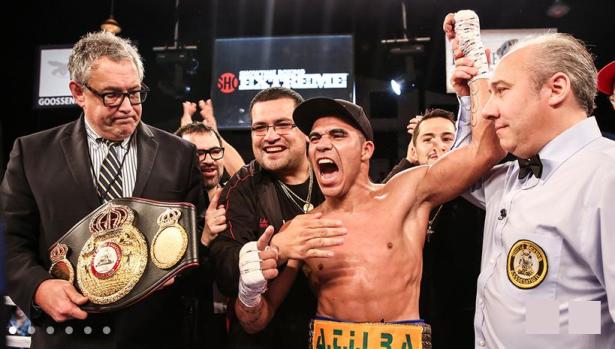 Tonight at the Little Creek Casino Resort in Shelton, Washington, interim WBA World featherweight champion Jesus Cuellar (26-1, 20 KO’s) retained the title with a fifth round stoppage of Ruben Tamayo (25-5-4, 17 KO’s) in the main event of a Showtime Extreme quadruple header.

Tamayo had no answer for the pressure of the defending champion, and despite a four inch height advantage, was out landed in both jabs and power punches. After outworking the challenger over the course of the bout, and scoring two knockdowns in the fourth frame, Cuellar ended his nights work at the midpoint of the fifth, cornering Tamayo and dropping him for a third time with a pair of body shots, prompting referee Mark Nelson to stop the contest.

This was the third successful defense for Cuellar, who scored a second round knockout over former two division world champion Juan Manuel Lopez in September, possibly ending Lopez’s career.

In the nights co-feature, featherweight Gary Russell Jr. (25-1, 14 KO’s) got back on the winning track, taking a 10 round decision over Christopher Martin (28-5-3, 9 KO’s), dealing Martin his second consecutive loss. Russell’s speed and reflexes made the fight relatively easy, as he shut out Martin on two of the three judges scorecards with Martin winning just one round on the third.

This was Russell’s first bout since a majority decision loss in June to Vasyl Lomachenko for the vacant WBO featherweight title.

In a junior middleweight contest for the WBC Continental Americas title, Julian Williams (18-0-1, 11 KO’s) remained undefeated, defeating Jamar Freeman (13-4-2, 7 KO’s) by eighth round TKO. Williams scored two knockdowns in the seventh frame, and cornered Freeman early in the eighth, dropping him for a third time with Robert Byrd waving off the action.

Opening the nights telecast were super middleweights Julius Jackson (19-0, 15 KO’s) and Jonathan Nelson (19-2, 9 KO’s). Nelson was dropped early in the opening round, recovered well and put forth a solid effort, but was out worked by Jackson, who scored another knockdown in the eighth round, and staggered Nelson early in the ninth causing the bout to be stopped. Jackson’s WBA Fedebol super middleweight title was not on the line.