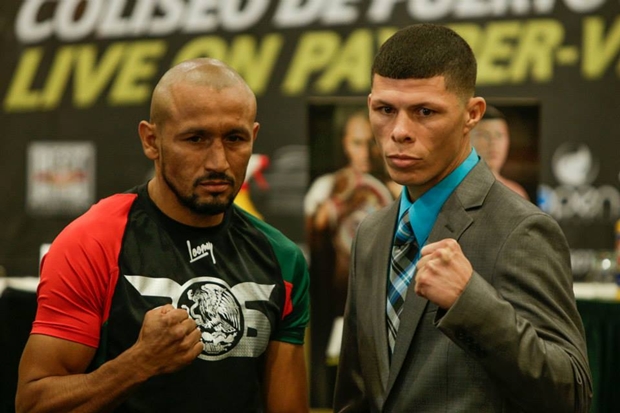 There was nothing new or unusual to report from the final press conference before Saturday’s Orlando Salido-Rocky Martinez super featherweight title bout. Everybody was in the best shape of their careers…excited for this great opportunity…eager to prove themselves in combat…blah, blah, blah…

But Orlando “Siri” Salido (42-12-2, 29 KOs) has never been a man of words, anyway. Preferring to let his fists do the talking, the native of Ciudad Obregon, Sonora, Mexico can’t seem to be shut up in the ring– even when walking into what could be construed as matchmaking traps.

Back in 2011, the tough but well-weathered Salido was shipped off to Puerto Rico to be sacrificed at the home country altar of rising featherweight superstar Juan Manuel Lopez. Instead, Salido out-toughed and out-fought the heavy-handed Boricua bomber and delivered a most shocking and entertaining upset.

Eleven months later, Salido was flown back to Puerto Rico to give a revamped and refocused Lopez another crack at beating him, but the result was the same. Salido proved himself to be too tough for Lopez and took him out via tenth round TKO in another thrilling war before a hostile crowd.

In 2013, the mega-talented Mikey Garcia jumped to a huge early lead against a stunned Salido, but was fortunate to escape with a headbutt-caused technical decision win in the eighth round. Salido, who had been down four times in the first four rounds and was battling with a fractured orbital bone, was coming on strong at the time of the fight-ending accident.

Nine months later, Salido would be back and ruining the planned showcase of boxing’s first openly gay fighter, Orlando Cruz with a one-sided TKO.

In March of 2014, Salido would beat back the challenge of Top Rank’s mega-Olympian superstar, Vasyl Lomachenko in a bout that featured a dead-tired and battle-wearly Salido surviving a late surge to score the split decision victory. And while Salido took the talented Ukranian to school, it was worth noting that he barely survived the late rounds onslaught of his rival. At 33 years of age, Salido seemed to be very close to the end of his career.

Six months later, though, Salido would stop Terdsak Kokietgym for the WBO interim super featherweight title in a Fight of the Year brawl which saw Salido hit the deck three times to Kokietgym’s four falls.

And now, just seven months after winning his last war, he’s being sent back to Puerto Rico to face yet another younger, hard-hitting Boricua in Roman “Rocky” Martinez.

The 27-year-old Martinez (28-2-2, 17 KOs) is a two-time holder of the WBO super featherweight title up for grabs in this bout. Although limited in both ability and knowledge, Martinez is relatively heavy-handed and aggressive– definitely a tough out for a fighter who could possibly have left the best of himself behind in four years’ worth of uphill battles and a career’s worth of tough scraps.

Yes, it’s very possible that “Siri” Salido is done. The Kokietgym battle should not have been so complicated or dramatic and, really, it was only extreme mental toughness and veteran guile that kept him alive in the later rounds of the Lomachenko fight.

But, then again, extreme mental toughness and veteran guile have been the two factors most crucial to Salido’s ascension from the rougher-than-rough Mexican club circuit to unlikely, elite-level world champion status.

Boxing has been counting Salido out since 2011, wanting to offer him up as a sacrifice to better stars and bigger names. Eventually, the rugged, stubborn defiance will not be enough to get him past younger, fresher foes. That much is basic boxing truth. The question come this Saturday, however, is whether Martinez is young enough, fresh enough, good enough to finally put Salido away.

The answer could very well be “yes” to all three, but, as history tells us, it would be a very big mistake to count Siri out.