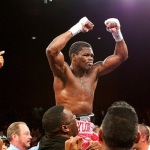 Against the odds and against the best wishes of many concerned fight fans, Jermain Taylor pulled off the upset Wednesday night and defeated defending IBF middleweight titlist, Sam Soliman. The title fight, broadcast by ESPN2, was hardly a boxing classic as a stiff, mechanical, and at times hesitant Taylor defeated a Soliman who was, pretty much literally, a one-legged … END_OF_DOCUMENT_TOKEN_TO_BE_REPLACED

I think it's high time that former 4 division world champion, Erik "El Terrible" Morales retires from the sport. That, or perhaps a name change to "The Terrible" is in order... That one was lost in translation. If Erik is intent on continuing his downward spiraling career, how about at the very least a changing of his strength and conditioning coach? Morales's floppy, … END_OF_DOCUMENT_TOKEN_TO_BE_REPLACED