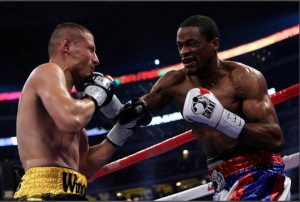 Haye v Povetkin looks like it could be finalised soon. When did Povetkin find his balls?

Should Khan beat McCloskey in April it looks like his next dance partner will be Timothy Bradley in a fight that will crown an undisputed champion at 140lbs.

Saul Alvarez will be a ” World Champion” after his next fight. Apparently beating Mathew Hatton makes you a world beater. That’s great news for the mighty Craig Watson, Alan Bosworth, David Kirk and David Keir who have all defeated Hatton before now. Just contact Jose at the WBC guys, for a small fee you too could hold a version of the WBC belt.

No real news about Floyd Mayweather this week, what will the haters do now?

Manny Pacqiauo lost out in the Laureus award to Rafael Nadal. I know I give Pac some stick, but he deserved to be nominated, I was very suprised that Lionel Messi didnt win though.

Speaking of Pacqiauo, Bernard Hopkins shared some light on what makes the prize of the Philippines so special : “You know Pacquiao’s human in case anybody forgot. I believe that he wipes his butt the same way we do.” If I am honest I thought by now Manny would have hired someone to do this for him.

Staying with Bhop, GBP won the purse bids for his rematch with Jean Pascal, which seems strange as the venue was already agreed before the fight.

The Super 6 Semi Finals seem to have stagnated. Personally, I don’t care about Ward-Abraham just give Ward a bye and let Johnson and Froch go to war.

Lets look at this weeks fights.

Carlos Quintana is back after taking almost a year out after his defeat to Andre Berto. Quintana returns against Ishmael Tetteh at 154lbs. Expect an easy nights work.

Jan Zaveck defends his 147 IBF title against Paul Delgado. Normally I would go on a rant about how the challenger doesn’t deserve to even look at a world title, but lets be honest, neither does the champion.

Now, I have been driving the Fernando Guerrero bandwagon for a while now and he is back this Friday night. However, he is fighting a guy who has lost 4 times in 21 fights. Whats the point?

Same goes for Shawn Porter, fight someone who will actually fight you or just give up. It’s boring now.

Junior Witter makes his comeback at 147 for some strange reason in Canada. The question is does anyone care?

UK Heavyweight prospect Tyson Fury takes on the undefeated power punching Brazilian Marcelo Nacimento who, to be honest, No one knows anything about.

On the same card Lenny Daws takes on Ashley Theopane in what should be an intriguing contest. Theopane has been based in the USA for the last couple of years and may possibly have too much for the UK based Daws.

Felix Sturm is back against Ronald Hearns, but does anyone care? The real 160 Champion is Sergio Martinez, why does Sturm show no sign of wanting to face the best? I will leave you all to answer that.

Mike Jones and Jesus Soto Karass renew hostilities towards each other after their controversial fight late last year. This time out I expect Jones to have learned his lesson and take Karass out comfortably.

The fight of the week features Nonito Donaire and Fernando Montiel. This is the first true superfight of 2011 but I hate to spoil the party as I expect Donaire to dominate Montiel and force a mid to late round stoppage. Donaire is a beast at the weight and I think this will be the first fight in which he actually justifies his lofty p4p rankings since he beat Vic Darchinian almost 4 years ago. You can never count Montiel out due to his explosive power, however the Filipino Flash seems to have the edge in every other department.

See you next week.