Carson Jones was flown into the UK to lose and lose impressively, to be sacrificed to emerging 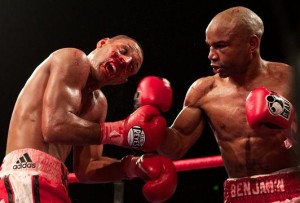 star, Kell Brook. But matchmakers for Brook promoter, Eddie Hearn, completely missed the boat when choosing Jones as cannon fodder. Jones is one of the few old school contenders left in the sport.

Battle-hardened on the road against legitimately solid opposition, Jones (34-9-2, 24 KOs) learned to fight the hard way and has become a student of the game.

He would give away the  first 3-4 rounds against his more athletically gifted opponent, but he was working a game plan. Every round saw Jones up the pressure and dig harder to the body. He would survive several Brook surges, but for most of the second half of the fight, he was the one in charge and, on several occasions, nearly stopped the highly-regarded prospect.

Ultimately, the disparity in talent allowed Brook to walk away with the majority decision. But, legitimately, a case could be made for a draw in this thriller. So close was this battle, that promoter Eddie Hearn immediately ruled out a rematch. Brooks’ plans never included such a war without a title or a seven-figure purse attached to it.

Jones now heads back to Oklahoma City and, likely, back to the club circuit with only the pride of a really well-done job to show for his efforts.

Those efforts were worth a slot as this week’s Hero of the Week.

When watching boxing on TV, never forget that you are being sold a product– Especially on premium cable, where 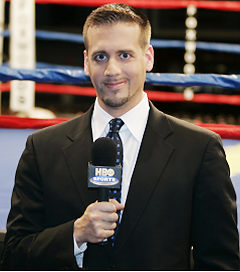 exclusive contracts are signed with specific fighters for the benefit of both parties. It’s in the best interest of the network to cultivate, protect, and promote their investment. Sure, you’ll get some analysis and some valid insight, but when push comes to shove, a product has to be sold.

A perfect example of this occurred last Saturday on HBO’s Boxing After Dark.

Max Kellerman, who has worked hard to cultivate the image of being HBO’s hard-hitting, objective journalist, blew that image to smithereens with an excruciating hard-sell of the Nonito Donaire-Jeffrey Mathebula bout.

Despite being a vocal critic of sanctioning body politics, Kellerman played up the title unification angle as if either belt up for grabs (Donaires’s WBO 122 lb. strap and Mathebula’s IBF belt) actually meant something. He went so far in his sales pitch that he actually made the cringe-worthy case for Donaire suffering through the wear and tear of facing the very best, fight after fight. Obviously, anyone who really follows the sport knows that Kellerman’s statement flies in the face of just about every objective analysis regarding the talented fighter.

Kellerman peddled a rather innocuous title bout between a top shelf star and a serviceable paper champion as if it were a real event– and in so doing, made himself look like a Grade A shill.