“When the legend becomes fact, print the legend.”
— The Man Who Shot Liberty Valance

“It is difficult to get a man to understand something, when his salary depends upon his not understanding it.”
— Upton Sinclair

Saturday, the first “major” boxing day of the year, featured several big fights spread out over the course of the day and in a small handful of countries throughout the world. A good and bad day for many reasons, it not only reminded us of the vitality of the sport, but also highlighted some of the issues that exist with how boxing’s stories are told.

— The story on two-time Olympic gold medalist Vasyl Lomachenko was that he was coming into Saturday’s WBO featherweight title bout as a one-fight pro, taking on the street-smart veteran champ Orlando Salido for a shot at instant world class acclaim.

It was such a great back story that, even when proven untrue, HBO and just about everyone else insisted on still telling it. 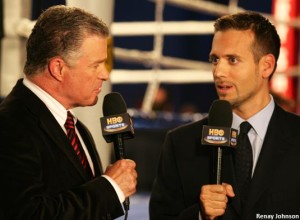 As correctly pointed out by Boxingtalk’s Scott Shaffer, Lomachenko’s six fights for the World Series of Boxing were paid fights using professional rules, professional equipment, and no headgear. They are also recognized as professional fights by the Association of Boxing Commissions (ABC), the organization entrusted with keeping official won-loss records for the sport.

Even HBO’s Max Kellerman seemed to support the idea that Lomachenko’s pro record before the Salido fight should’ve been 7-0 and not 1-0.

“If you get paid for a fight, you’re a professional fighter,” Kellerman said when the controversy was briefly addressed during the telecast.

Still, facts or not, controversy or not, HBO and just about the rest of the media went ahead with the dubious 1-0 claim (1-1 after the loss to Salido). For the record, The Boxing Tribune will use Lomachenko’s correct professional record of 7-1, 1 KO.

As time passes, it’ll be interesting to see whether the truth gains any traction when up against a good story.

— Back in June 2013, when Mikey Garcia failed to make weight for his WBO featherweight title defense against Juan Manuel Lopez and refused to try to melt off the excess poundage, it was explained that poor Mikey could just no longer make weight. His poor body, at twenty-six years of age,. had simply shut down.

None of the subsequent beating an oversized Garcia gave to Lopez was attributed to any sort of weight manipulation. Rather, it was a testament to the awesome talents of boxing’s new star.

Fast forward nine months or so and we find ourselves back in the same situation, except the grizzled veteran is now the weight offender and the shiny new star was in the opponent role.

Saturday, HBO’s Jim Lampley all but formed a lynch mob in his efforts to insinuate that Salido missed weight on purpose and was employing weight manipulation to gain the upper hand.

Almost two days after the Lampley character assassination we see that same theory thrown about by other media-types as if it were actual fact.

Now, logically, would it make sense for an older fighter, already giving away substantial advantages in speed and athleticism, to intentionally make himself slower by adding additional poundage? Would it make sense to do this when his game has never involved inside wrestling and leaning on opposition? And even if Salido did decide to play the weight game for this one fight, wouldn’t he have actually tried to employ this devious, nefarious plan at some point during the evening?

No, what we saw on Saturday was more likely the result of either poor preparation or the simple inability of a 33-year-old fighter, who walks around as a welterweight, to boil himself down to the featherweight limit.

It makes no sense that the veteran from Ciudad Obregon, Sonora would work his way down to within two and a quarter pounds of the target weight, just to “punk” Lomachenko, who, by the way, gained about eleven pounds in the same post-weigh-in period that saw Salido put on nineteen.

As the fight wore on, did the weight look to be an advantage?

There’s a real debate to be had as to whether the sport should go back to same day weigh-ins, but there wasn’t any real consideration of that issue on Saturday. All we got was character assassination fueled by not very well-founded speculation.  (To read more on the weight issue in general, click HERE).

As for the low blows, well, that’s another story. Salido took advantage of an inept Laurence Cole. (Although some of the many, many low blows can be attributed to the fact that Salido was throwing his trademark underhook uppecuts, exhausted and increasingly arm-heavy at a still-mobile opponent). However, this is a man’s sport and, well, shit happens. Headbutts, elbows, crotch shots, foot stomping, etc.– it’s all just part of the game. Lomachenko wasn’t crying and neither should we.

— Over in Scotland, Sky Sports announcer Jim Watt all but negated Terence Crawford’s title winning effort over Ricky Burns by making excuses for the poor performance of the defending WBO lightweight champ. The end result was that if you saw the SKY telecast, you were likely to downplay Crawford’s performance. If you saw any other telecast, though, you saw a masterful effort from an emerging star.

— As is usually the case in all things Chavez Jr., bullshit spin reigns supreme.

Yes, HBO, he’s refocused and mature because he has a baby. And he proved it because he made the 168 lb. limit. Oh yeah, and he really wants a crack at Gennady Golovkin.

But, of course, if he hadn’t refused to step on HBO’s unofficial pre-fight scale Saturday, we likely would’ve seen a cruiserweight Chavez matched against an arm-punching, bloated middleweight.And, as for Golovkin, it’s easy to want someone when he’s on the other side of the planet, temporarily inactive, mourning the death of his father.

But say things into a mic, no matter what it is, and people will believe.

And that kind of brings us to the main point of this Rant.

Those with the loudest voices control the narrative of this sport and, invariably, these same people are the ones with real partisan interest in telling a specific story– whether it’s actually true or not.

Almost everything that passes for news coverage and analysis in boxing is actually advertising. Even the scandals seldom wander into the forbidden zone of topics that may actually affect a promoter’s or network’s ability to make a buck off you.

It’s a sad fact that just about everyone is looking to manipulate the truth for their own purposes, whether it’s to exchange the “right” coverage for personal profit or to further advance some pet cause of theirs. Hell, some in the boxing media gain nothing from the shilling they do, they just follow the pattern already established by their peers.

Personally, it doesn’t matter if you immediately believe everything or anything I write. As a matter of fact, I insist that you go out and use your own common sense, your own logic to find out the truth and then come back to where you first heard it.

Unfortunately, things won’t be getting better anytime soon in this sport. Boxing carries with it a culture of corruption and most everyone from network big shots to smug, self-congratulatory bloggers think nothing of doing whatever they have to do in order to serve their own interests.

In the grand scheme of things, the performances of the HBO broadcast crew and Sky’s Jim Watt are not major offenses, especially when stacked up against some of the sport’s other nastiness. But all of this tells the story of a media that can and often does manipulate reality, with no real proof or concern for fairness, in order to tell the story that’s in their best interest to tell.