Hola family and welcome home to a thyme, rosemary and laurel leaf scented edition of Omaha’s 145th most popular bite-sized weekly pugilistic paper, The Sunday Brunch – We combine like the boxing column equivalent of the real diecast Voltron, not those fake plastic re-release ones that came out years later, I’m talking a serious choking hazard, people…This week we’re dissecting Terence Crawford’s big win over Yuriorkis Gamboa! So, without further ado, I gave you your instructions in the dressing room; what I say you must obey – Cuidate, escucha me, toca los manos y buena suerte…Let’s get it on! 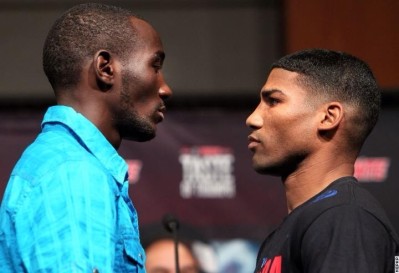 For not having a major boxing event since the 1970s, Omaha’s amazingly boisterous crowd showed up nearly 11,000 strong to cheer their hometown fighter on in his most important fight.

Let me be the first to say that Crawford boxed beautifully. After the fifth round he adjusted to Gamboa’s style and began to time the Cuban and started countering almost at will from a southpaw stance. Being a true switch hitter is a rare skill in boxing.

To be honest, though, Yuriorkis Gamboa should have never been in that fight to begin with. Not only were his last four fights a year apart each due to contractual and managerial issues, but the man is not the most sizeable fighter in the boxing landscape.

In fact, Crawford enjoyed and took full advantage of his four inch height advantage, his five inch reach and his natural seven pound lead over Gamboa.

Gamboa, in fact, spent most of his life fighting nearly ten pounds south of the contracted fight weight.

Yuriorkis gave a very good account of himself in the opening few rounds, but Terence Crawford’s poise, boxing skill and size were just too much for the rusty 32 year-old to overcome.

I would like to see El Ciclon De Guantanamo go back down to featherweight. He’s an extremely talented boxer and athlete. Even if the money isn’t as good south of lightweight, he’s just physically too small for the current crop of fighters.

For Yuriorkis Gamboa I’m envisioning bouts with Abner Mares or even a match with the comebacking Gary Russell. Imagine the explosiveness of a fight with Vasyl Lomachenko…How about Mikey Garcia? The Axe Man Nicholas Walters or the Mexican Russian?

To be brutally honest, with so many potentially fantastic matchups, if I were his “promoter”, Fiddy, I wouldn’t have ever let my best fighter move up way out of his comfort zone for a little bigger purse.

As for the WBO lightweight champ, how about a fight with Brandon Rios (although, I see that one being fairly one-sided due to Crawford’s speed and Rios’ lack thereof)? Omar Figueroa would pose an interesting challenge to Bud Crawford.

There are even rumors of Crawford moving up in weight (which it would seem he would be able to quite easily) and that would present a whole new roster of challenges and challengers. The prospects at junior welterweight are almost mind blowing and Terence Crawford’s ceiling seems so high at the moment.

To just name a few potential 140 pound competitors out of one of the deepest divisions in boxing…Zab Judah, Danny Garcia, Amir Khan, Lucas Matthysse. How exciting would a bout with Manny Pacquiao be?

Of course all of this comes with a lot of ‘ifs‘ and totally depends on Golden Boy and Top Rank’s hopeful partnership.

Thanks for joining us again this week, we’ll be back next time with our regularly scheduled programing. Also on tap: London’s Tube and how to successfully navigate it…And we will give you tips and tricks on how to get rid of the spyware and malware you got from your daily trip to boxing scene. Until next Sunday, sante!
@JESSEBOXING
JESSEBOXINGTRIBUNE@GMAIL.COM